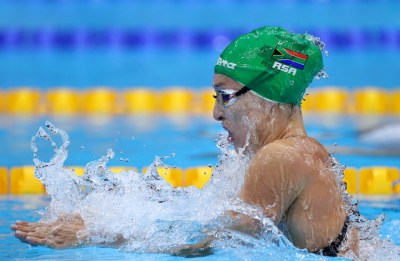 In just a matter of days, Team South Africa will begin their quest for Commonwealth glory as the Games kick off with the Opening Ceremony on Thursday, 28 July.

The South African contingent returned from the Gold Coast Commonwealth Games four years ago with a haul of 37 medals, 13 of them gold. But surpassing or even matching that this time around could prove a tough ask.

Traditionally the sports of swimming and athletics have led the way when it comes to podium performances – the two sports accounting for 26 of the medals won at the 2018 Games – 11 of them gold.

South African swimming coach Wayne Riddin is confident of a successful campaign in the pool.

"There will be a number of events we as South Africa should be featuring very well in," he said. "However, one must always remember that before we talk medals, we need to make sure that the swimmers actually get into the finals first."

Riddin said that those swimmers who remained in South Africa to prepare for the Games faced a two-fold challenge in terms of the cold winter weather and load-shedding, which meant that training pools weren't heated to their usual temperature.

"We’re obviously looking towards Chad le Clos to continue his successes at the Commonwealth Games in achieving his record goals. Then the next expectation from everybody is to look towards Tatjana Schoenmaker after her successes in Australia [double gold in 2018] as well as her world record performance and gold and silver medals in Tokyo last year," said Riddin.

"Then all eyes will be on Lara van Niekerk who recently won the bronze medal in the 50m breaststroke at the World Championships in Budapest, and Kaylene Corbett who did so well in Tokyo in the 200m breaststroke. There is the outside possibility that there could be a challenge for two medals in each of the women’s breaststroke events [50, 100 and 200m breaststroke].

"Looking towards the other younger up-and-coming swimmers on the team, it will obviously be Matt Sates and Pieter Coetzé. These two will be up against the world’s best from Australia and Britain and will look at making an impact at senior level.

"But swimming has its own way of teaching us lessons and often the unexpected can happen and too many expectations can be dangerous, "he added.

"Other ladies that could step up to the mark will be Emma Chelius with her speed in the 50m freestyle, Aimee Canny especially in the 200m freestyle, Erin Gallagher in the 100m freestyle and butterfly events and Rebecca Meder in the 200 and 400m individual medley.

Riddin added that there are several relay events in which the South African teams could also feature.

TRACK ATHLETES IN THE MIX

As for the track, just three South Africans reached their respective individual event finals (aside from the events that were contested as straight finals) at the recently concluded World Athletics Championships in Eugene, Oregon – Luxolo Adams (eighth in the 200m), Akani Simbine (fifth in the 100m) and Wayde van Niekerk (fifth in the 400m).

Simbine will be heading to Birmingham to defend his 100m title, and while Adams boasts the fastest 200m time in the Commonwealth this year, he has withdrawn from the team with fatigue. Van Niekerk has also chosen to forgo the Games as he continues his journey back from injury.

One man who knows what it takes to excel on the Commonwealth Games stage is 2014 triple jump champion Khotso Mokoena, who is chairman of the SA Sports Confederation and Olympic Committee, Sascoc’s, Athletes Commission.

"Going into the Commonwealth Games this year, I think what is exciting is that we’ve already seen athletes starting to perform at the right time where previously athletes would only perform earlier in the year or later in the year when everything is finished, "said Mokoena.

"Akani Simbine is running very well so I think our athletes are really ready for these Games and I think we are going to produce good results.

Meanwhile, there are numerous para-athletics events included in the track and field programme in Birmingham and the SA team includes several Paralympic medallists who could well also add to the medal haul. Among them are Jonathan Ntutu, Charl du Toit and Sheryl James.

Other sports to keep an eye on for medal possibilities are the likes of rugby sevens (the Blitzboks having won gold in 2014), wrestling, judo, and triathlon, while the SA netball team are also gunning for a podium place. Women’s T20 cricket is making its debut at these Games and the South African team will be hoping to bounce back after some disappointing results in their recent series against England.

Another sports code that consistently brings back medals from the Commonwealth Games is lawn bowls. Team SA claimed five medals in 2018 and seven medals four years before that, five of them gold.

One of those gold medallists, Prince Neluonde, is confident the team can make a return to the top of the podium.

"In terms of preparation and training so far, we have been doing very well," said Neuonde. "We have been practising from the beginning of the year by taking part in competitions. We have a very strong squad. I still believe that the South African lawn bowls team can bring back the medals. We always bring medals back from the Commonwealth Games."

More in this category: Blitzboks wallop Malaysia to open Commonwealth campaign. »
back to top