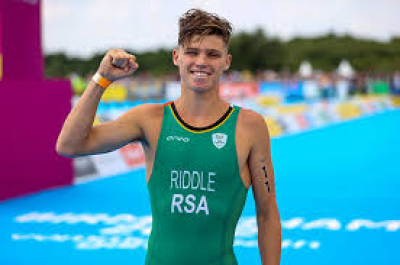 Having been out of competition for a year now through injury, a fairy-tale podium performance was unlikely for defending champion Henri Schoeman when the first medal of the Commonwealth Games was up for grabs in the men’s triathlon on Friday.

As it turned out, Schoeman withdrew from the individual event in Birmingham to focus on Sunday’s mixed team relay. But in his absence, another South African emerged as a top contender.

Jamie Riddle finished the 750m swim in the front pack and stayed out in front in the 20km cycle leg. He remained in the breakaway and it wasn’t until the 5km run leg that he was eventually overtaken and knocked out of a podium position to finish in sixth.

It was an impressive result for the 22-year-old in his first major senior competition. Britain’s Alex Yee took the gold, with Wilde finishing with silver and Australia’s Matthew Hauser claiming bronze.

"I think 10 years of dreaming became a reality and it’s such a special moment, "said Riddle at the finish.

"Throughout the race I just had goosebumps. I knew that I had the strong swim so I just wanted to take it out hard and Tayler Reid from New Zealand really went for it. I got onto the bike and we established a little three-man breakaway, and I just thought this is perfect. What more could I want?

"The rest of the race I was just trying to soak it in – while also completely dying. Then I got into the run. My run has come a long way and I really sent it, and that came to bite me on the bum towards the end. But, my first Games, sixth place, 22 years old, I could not be more proud and honoured with that performance."

Meanwhile, beaming with pride from the stands was dad, Alec Riddle – possibly better known to some as the Eye in the Sky commentator for the Comrades Marathon and himself a former age group Half Iron Man world champion.

"I’m very excited. You just never know how these races are going to go down and you’ve got to think on the fly," he said. "I think when Jamie saw Hayden Wilde there he thought well, here’s a chance. Hayden Wilde is probably the strongest biker in the bunch. He was prepared to commit himself, he just ran out of legs on the run.

"Jamie didn’t back down, he was courageous and at 22 to come sixth is a big confidence booster for him."

Riddle junior is hopeful of Team SA’s chance in the team relay.

"I think we have an outside chance… I know Henri has taken off today to focus on that and he’s a key player to our success. We’ve got two amazing women who are super-strong so we do have a shot and I think our South African gees will carry us through the day," he said.

South Africa’s other contender in the race on Friday, Dante Nortje, finished in 21st place.

VAN NIEKERK BEGINS WITH A BANG

Elsewhere, Team SA’s swimmers kicked off their campaign with a successful morning of heats in the pool.

Recent World Championships bronze medallist Lara van Niekerk set a new Commonwealth Games record of 29.82 in the 50m breaststroke. While it’s the fastest anyone has swum in Games history, it was still a little off the African record of 29.72 she swam at the National Championships in Gqeberha earlier this year.

Also powering through to the evening semifinals in the event were Olympic 200m breaststroke champion and world record holder Tatjana Schoenmaker (30.76) and her TUKS teammate, Kaylene Corbett (31.07).

"I’m happy, that is a very good morning swim. I can’t be upset about that so I am excited for the semifinal to see what I can do next," said Van Niekerk after her heat.