Blitzboks looking to be 'clinical' against Scotland at Commonwealth Games. 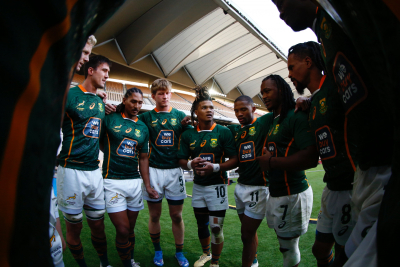 The Springbok Sevens team made it two from two as they dismantled a physical Tongan team to win 36-5 and end day one of the Commonwealth Games’ Sevens unbeaten.

But the win came at a great cost as they could have lost Mfundo Ndlovu to concussion after a red-card high shot from Tongan John Ika.

Ndlovu will have to follow the return to play protocols for concussion but the chances are slim he will play a part in the rest of the tournament, which ends on Sunday.

Still, the Blitzboks now face Scotland on Saturday to settle the pool as both sides registered two wins from two in their pool games.

Christie Grobbelaar scored twice, and was followed onto the scoreboard by JC Pretorius, Sakoyisa Makata and captain Shakes Soyizwapi as the Blitzboks eased into the playoff rounds with the victory.

Earlier, Springbok Sevens speedster Angelo Davids scored a hat-trick as the Blitzboks kicked off theircampaign with a solid 46-0 win over Malaysia in their opening game.

Davids scored twice in the first half as the Blitzboks opened up a 22-0 lead by the break and added a third shortly afterwards.

Muller du Plessis and Selvyn Davids both scored in the first half, while Dewald Human, Shakes Soyizwapi and Zane Davids added second half tries to complete the rout.

The South Africa's Womens' Sevens team, meanwhile, will be looking for their first win in their final pool game after failing to score a point on day one of the Commonwealth Games Sevens tournament.

After losing 38-0 to tournament favourites Australia in their opening game, things didn’t go better in their second game against Fijiana, with the South Sea Island nation scoring 41 points against the South African side.

Their hope now lies in facing Scotland on Saturday, who also lost badly on day one. Scotland were beaten 33-12 by Fijiana and 50-0 in a rout by Australia, and the two sides will play for the pool wooden spoon on Saturday morning.

The Blitzboks men's team will face Scotland at 1:18pm.