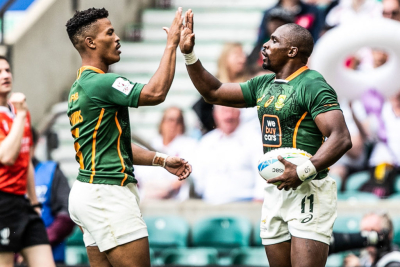 The Springbok Sevens team moved into the quarterfinals of the Commonwealth Games Sevens tournament with a clinical, impressive 34-0 win over pool rivals Scotland.

It was a manner of sweet revenge for the Blitzboks as they downed the Scots, who had upset them the last time these two sides played, with winger Angelo Davids scoring a hat-trick in the process.

Davids was the recipient of some exceptional pinpoint kicking as he took advantage in the second half of a tiring Scotland defence to be on the end of two good grubber kicks and then got his hat-trick with a kick-pass near the end of the game.

Considering the first four minutes of the game the Blitzboks didn’t have the ball, their defence carried them through to win the breakdown contest and once they got the ball, they never let the Scots in with a chance.

There were concerns for the Blitzboks though as they lost captain Siviwe Soyizwapi to a head clash and Muller du Plessis to a suspected rib injury and the medical assessment will be key to see if they continue in the business end of the tournament.

Selvyn Davids set up the first try before a grubber kick by Du Plessis floored the defence and saw JC Pretorius pick up the scraps and force his way over for the second try to see the Blitzboks in a 10-0 lead at the break.

In the second half it was the Davids show as he took advantage to score his hat-trick with some stern defence holding Scotland at every chance they got their hands on the ball.

Shaun Williams rounded off the victory with a late try to seal a polished performance by Neil Powell’s side.

The Blitzboks will face the second placed side in Pool C - where Fiji currently top the group and there is a fight between Wales and Canada for second spot later on Saturday evening.

Kenya qualified for the quarterfinals and will face New Zealand after finishing second in their pool after they narrowly lost their pool decider 7-5 to Australia on Saturday.