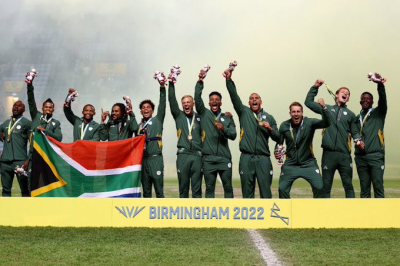 The Blitzboks, current World Rugby Sevens Series leaders, outscored the Fijians five-tries-to-one in a 31-7 victory to finish the tournament unbeaten and repeat the gold medal-winning feat of Team SA in Glasgow in 2014.

A clever kick by Selvyn Davids put Muller du Plessis over in the corner for a converted try in the fourth minute, before JC Pretorius and Shaun Williams dotted down for a 17-0 lead at half time.

Du Plessis was in for his second after the break following quick wide play by the Blitzboks from a midfield scrum. Ronald Brown added the extras to make it 24-0 for the South Africans.

Fiji finally got on the scoreboard with a well-worked try from a lost SA lineout deep in their own half, but a second converted try for the Blitzboks, this time after a powerful finish by Mfundo Ndhlovu, put the game beyond doubt and secured another gold medal for head coach Neil Powell.

Earlier, New Zealand took bronze after a 26-12 win against Australia, while the SA women’s team finished the Games in seventh with a 52-0 victory over Sri Lanka.

More in this category: « Proteas back to winning ways with dominant win over Barbados. Powell hails Blitzboks ahead of the final leg of the World Sevens Series. »
back to top