Powell hails Blitzboks ahead of the final leg of the World Sevens Series. 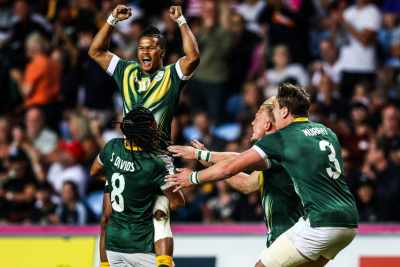 Springbok Sevens coach Neil Powell says the Blitzboks' gold-medal win at the Commonwealth Games was just the boost they needed for the final leg of the World Sevens Series and Sevens World Cup.

The South Africans scored five tries to one, dominating the Fijians from the outset, with Muller du Plessis dotting down twice, while JC Pretorius, Shaun Williams and Mfundo Ndhlovu also crossed the whitewash for the Blitzboks in their 31-7 victory.

Powell said it was important for the team to regroup after their disappointing performances at the HSBC World Rugby Sevens Series events in Toulouse and London, where they failed to reach the semifinals after winning the first four tournaments of the 2022 season.

"I'm probably more relieved than anything else and really proud of the boys, they put in a massive effort – not only in the final against Fiji, but all six games over the weekend,"said Powell.

"It’s amazing to have won the gold medal again, like we did eight years ago in Glasgow, and especially after we finished fourth and didn’t win a medal at the previous Commonwealth Games in Australia, so there is a lot of emotions and the victory brought back memories of what happened in Glasgow in 2014."

Although they were superb with ball in hand, often breaching the defence of their opponents during the weekend in which the Blitzboks scored 34 tries, they conceded only four five-pointers, something that Powell was also very happy about.

"The guys worked tirelessly on defence, sticking to our systems and putting in a massive effort, especially against the bigger opponents," he said.

"After the World Series tournament in London, we had to reset and re-evaluated our goals for the rest of the season and the last three tournaments, the Commonwealth Games, the Los Angeles Sevens and finally the Rugby World Cup Sevens.

"The guys really worked hard in the build-up to this tournament, and I’m glad they got rewarded for it, showing once again that although hard work doesn’t necessarily guarantee success, it’s part of success.

"For our confidence, it was important for us to deliver a good performance here, especially after what happened in London, and to get some momentum and belief back. Hopefully the belief we got from this tournament, will carry us to LA and then the RWC Sevens early in September."

Ten of the South Africans' 34 tries were scored by Angelo Davids, who returned to the Blitzboks team after a great Carling Currie Cup season with DHL Western Province, and Powell was very happy to have the speedster back.

Angelo Davids scored hat-tricks in three games – the pool encounters against Malaysia and Scotland, and again in the semifinal against Australia – many of the five-pointers coming from the clever use of kicks, especially from Selvyn Davids.

"I think we must bring Angelo permanently back to sevens again," smiled Powell when asked about Davids’ exploits in Birmingham.

"Firstly, he's amazing human being and a great rugby player as well. He always gives 100 per cent effort and he’s really quick, and we know if we kick the ball in behind our opposition, he’s going to chase it to the best of his ability.

"He has really had an amazing tournament, just like the other 12 players as well; everybody played their part and I’m happy for each and every one of them."