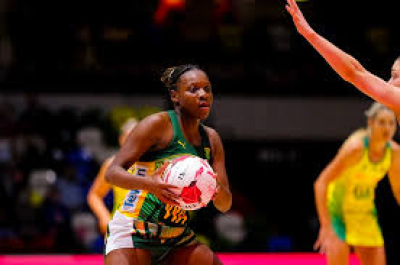 The two teams started like a house on fire and were going off at each other for a third of the first quarter and the match was evenly matched however a few misses by South Africa at the nets gave the Diamonds an opportunity to take the lead and run with it.

South Africa's Head Coach Dorette Badenhorst started with her strong side to date however she had to make a forced change with five minutes left on the clock with Izette Griesel being subbed. Zanele Vimbela came in at goal defense and Shadine van der Merwe who was in that position moved to Wing defense.

Khanyisa Chawane and Bongiwe Msomi swapped positions around. These changes seem to have given South Africa a chance to step up and push their opponents. At the end of the quarter, it was Australia who were 19 – 11 up.

South Africa started the second quarter the same way the finished the previous quarter, they scored two quick goals to reduce the lead to five points however Australia found their rhythm again and turned on the pressure to take charge of the quarter and managed to win the quarter 21 -13 and this took overall score to 40 – 24.

The start of the third quarter saw Badenhorst making a few changes with the introduction of Elmere van der Berg in attack and Nicola Smith in defense. South Africa played one of the best quarters thus far however it was the experience of the Diamonds that came out as they finished the quarter 56 -37.

Australia maintained their unbeaten record against South Africa by winning the match 74 -49. South Africa will face Wales on Wednesday 03rd August 2022, a team that they played against just over a week ago.

More in this category: « Powell hails Blitzboks ahead of the final leg of the World Sevens Series. Whitebooi lands gold as judo and gymnastics join medal party. »
back to top