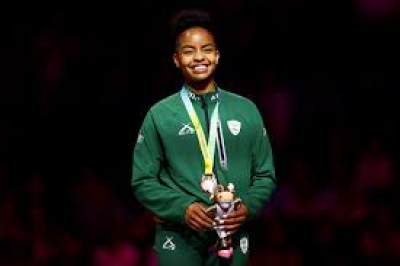 Michaela Whitebooi, Charne Griesel and Caitlin Rooskrantz joined the South African medal rush at the Commonwealth Games in Birmingham on Monday, adding a gold and two bronzes to the haul.

Whitebooi defeated Welsh athlete Ashleigh-Anne Barnikel in her 48kg judo quarterfinal and England’s Amy Platten in her semifinal to advance to the final against India’s 2014 Commonwealth silver medallist Shushila Likmabam. She then pulled off another victory in a bout that went to extra time to take the gold.

"I just knew I had nothing to lose so I went out there and I pushed so I’m obviously very happy to win… this is very big because I'm showing that I can get good results and I’m really proud of myself" said an elated Whitebooi, who was knocked out of the first round at last year's Tokyo Olympics after coming up against the defending champion.

Speaking about the bout itself, she explained: "It was a full fight for four minutes and then we went into extra time. It was very difficult because she was very strong, lots of grips.

"We both had penalties so either one of us had to score and I’m happy that at the end it was me, "she added after one final throw sealed the gold.

"You know what, it was just body reaction but I think I envisioned that throw even before I went onto the mat. I really wanted to win with that throw and I'm so happy that I did… I’m sure my mom is at home crying right now. She’s my hero, "added the 26-year-old, who took up judo because she enjoyed watching one of her friends "beating up the boys".

"This was my goal and this medal will mean a lot for judo in South Africa as a whole,"she added, wiping away the tears.

Later in the afternoon, Whitebooi's teammate Charne Griesel won her 52kg bronze medal bout against Cameroon's Marie Celine Baba Matia."I'm quite happy. When you start a fight it's 50-50 and as the fight goes on, you get a higher probability of either winning or losing, and in the end it's your playing tactics that win you the medal – tactics and persistence," said Griesel.

Meanwhile, over at Arena Birmingham, 20-year-old Joburg gymnast Rooskrantz also graced the podium after claiming the bronze medal in the uneven bars with a score of 13.433. England’s Georgia-Mae Fenton took the gold and Australia's Georgia Godwin the silver.

Rooskrantz’s teammate and fellow Olympian Naveen Daries finished seventh in the vault final, which was won by Godwin.

"It’s incredible, a big dream come true for me," said Rooskrantz afterwards. "This is something I’ve been working towards for a few months now. I’m glad that I went full-out for the goal, as I did. I’m really happy to be standing here with a medal around my neck."

In other action, the men's beach volleyball side of Grant Goldschmidt and Leo Williams went down 21-12 21-12 against Australia’s Chris McHugh and Paul Burnett.