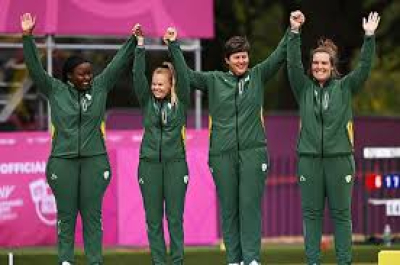 The first time Thabelo Muvhango pulled on her South African kit for her international debut at the Commonwealth Games in Birmingham, she could feel the nerves kicking in.

But walking away from her first Games with a silver medal as part of the women’s fours alongside teammates Bridget Calitz, Esme Kruger and Anneke Snyman made it all worthwhile.

"I got nervous and shaky every time at the beginning," she admitted. "But Bridget has been there telling me 'relax, you’ll be fine, you can do this. Just have fun and everything will go well".

Everything did indeed go well for the South Africans who defeated hosts England 12-11 in their quarterfinal and then followed that up with a 16-14 victory over Fiji in their semifinal to ensure a podium finish, before missing out 17-10 to India in the gold-medal match on Monday.

It was a nail-biting encounter in which the South Africans came from 8-2 down after seven ends, to level matters at 8-8 after the 10th, but the Indian team then pulled away to win 17-10 and claim a first ever lawn bowls gold for their country.

Explaining how the match had panned out, Kruger – who along with Snyman also claimed women’s fours silver at the Gold Coast Games four years ago – said: “Going into the game I think it was close in the beginning and then they started finding it. We were unsure of which hand to play because the ditch hand was much heavier than the inside hand so we had a 2m speed difference and I think we struggled with that, but they already had it.

"When we came back I thought, ok now we have a chance and then I don’t know what happened. It wasn’t meant to be," she added.

"But India played extremely well. They were hungry for the gold – it’s their first medal ever so I take my hat off to them, they played brilliantly and I’m very happy for them."

Calitz, who was competing at her first Commonwealth Games, added: "It's an amazing feeling, we did our best, we were so glad for this team to be in the final so we’re so happy and proud of this silver medal."

As for Muvhango, she knows this silver medal will mean a great deal back home, where there aren't too many Black players involved in the game.

"It means a lot back home. They will see that even us Black people can play this sport. It’s not only for other people. So they should also come and join and have fun, "she said.

The women’s fours silver ensures that South Africa have earned a medal in lawn bowls at every Commonwealth Games since readmission, with several more opportunities to further add to the haul in the week ahead.