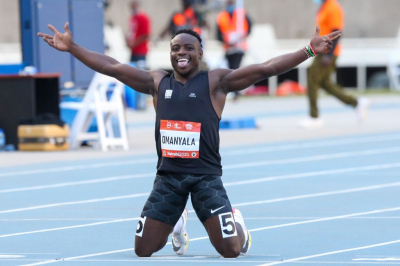 Ferdinand Omanyala beat Akani Simbine to the line to claim the men's 100m gold medal at the 2022 Commonwealth Games.

Omanyala dethroned the reigning champion Simbine by running 10.02 seconds to become the first Kenyan to win the race in over 60 years.

Simbine settled for silver with a time of 10.13 seconds. Omanyala was the favourite after going through the semifinals with the fastest time.

The 26-year-old has now added the Commonwealth title to his African title. He is also the fastest man on the continent, with a time of 9.77 seconds.

It was redemption for Omanyala, who missed out on the finals of the World Athletics Championships after delayed visa issues curtailed his preparations. He ended up bowing out in the semifinals.

England’s Nethaneel Mitchell-Blake seemed to pull up around halfway as he finished last, while Wales' Jeremiah Azu was fifth.

The two-time Olympic champion had company for the first 50m but accelerated away to pip Saint Lucia’s Julien Alfred to the line.

England’s Daryll Neita came third, but had she repeated her semi-final time would have won gold.

It’s nice to get a medal on home soil," Neita told the BBC.

"I really didn’t put the best race together and that just makes me want to get back to work right now. It’s great to get a medal at the Commonwealth Games and I ran a PB in the semi-finals, so I’m in fantastic shape, but I need to perform better in these finals.

"I am racing the fastest women that have ever existed, it’s an honour and encouraging, it’s a really great atmosphere to be a part of."

Thompson-Herah added: "Feeling good, I didn't have the best execution but nevertheless I had to dig for that one but I am still grateful to win my first Commonwealth Games title."

More in this category: « Transport woes for Le Clos, Proteas miss out on the semis. Ndodomzi Ntutu adds another gold medal to the Team SA tally. »
back to top