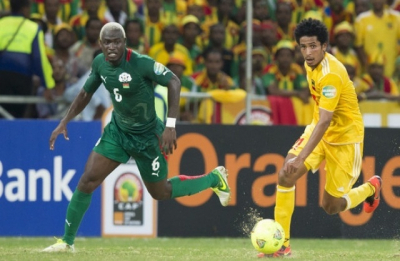 Hosts Cameroon have named a 28-man squad for the 2021 Africa Cup of Nations, which begins on 9 January.

Vincent Aboubakar will captain the Indomitable Lions, who last won the tournament in 2017 and are bidding for their sixth continental crown.

Enzo Ebosse, who plays for French side Angers, is the only new face in coach Toni Conceicao's squad.

Cameroon are in Group A alongside Burkina Faso. Ethiopia and Cape Verde, and begin their campaign against the Burkinabe on the opening day of the Nations Cup.

The tournament, which culminates with the final on 6 February, has been delayed for a year by the coronavirus pandemic.

Confederation of African Football (Caf) president Patrice Motsepe has reiterated that the tournament will go ahead as planned despite recent speculation about it being further delayed, cancelled or moved.

More in this category: « Sadio Mane, Ismaila Sarr and Kalidou Koulibaly named in Senegal AFCON squad. CAF confirms VAR to be used in all 52 matches in Cameroon. »
back to top