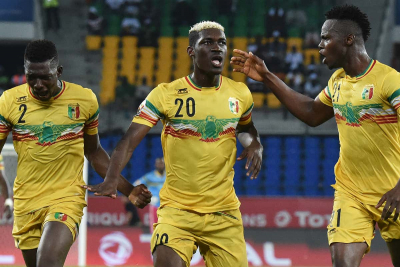 Mali have recalled Brighton midfielder Yves Bissouma to their squad for the Africa Cup of Nations, after three-year international absence.

Bissouma was named by the Mali coach Mohamed Magassouba on Friday in a 28-man squad for the tournament that kicks off in Cameroon on 9 January.

The 25-year-old has not played for Mali since a Nations Cup qualifier in 2018 after reportedly falling out with the coach.

He missed the 2019 Nations Cup in Egypt with a shoulder injury.

English Premier League side Brighton said on Monday it had not been contacted directly about Bissouma's call-up for the Nations Cup.

There was also a surprise call-up for defensive midfielder Hamidou Traore, who last featured in the squad in March, but Cheick Doucoure from Racing Lens was an unexpected omission after playing in World Cup qualification in September.

Mali, who have also qualified for Africa's 2022 World Cup play-offs, open their Nations Cup tournament on 12 January against Tunisia in Limbe and also take on Gabon and Mauritania in Group F.