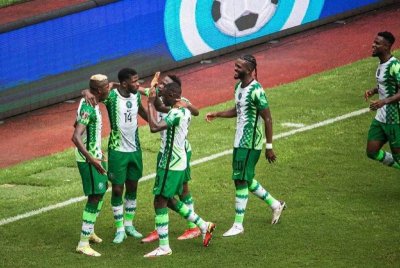 Watford's Emmanuel Dennis and fellow striker Victor Osimhen have both dropped out of Nigeria's squad for the Africa Cup of Nations.

The Hornets have reportedly refused to release Dennis, who has scored eight Premier League goals this season.

A Nigeria Football Federation (NFF) statement said Dennis had been excused because Watford were "baring fangs".

Osimhen has been ruled out following a positive Covid-19 test and is still recovering from facial fractures.

The injury in November was expected to rule the Napoli frontman, 23, out of the tournament, which starts on 9 January in Cameroon.

Dennis, 24, will now be available for Watford's league games against fellow strugglers Newcastle and Norwich, as well as their FA Cup third round tie at Leicester City on 8 January.

Watford manager Claudio Ranieri said: "I knew the board and Nigerian board were speaking. I accept every decision they find and that for me is finished."

Asked whether the decision for Dennis to remain with his club disrespected Afcon, Ranieri added: "No. They have a lot of players and then they changed the managers and everything. We were ready to give over the players, they didn't do it. The two boards spoke and for me it is OK.

"Of course he wanted to go to play but he also wanted to help Watford."

Dennis and Osimhen have been replaced by Sparta Prague striker Peter Olayinka and Olympiakos forward Henry Onyekuru, while the Super Eagles have also been forced to make two changes in defence.

Rangers defender Leon Balogun and Cyprus-based Abdullahi Shehu have both been replaced by West Brom's Semi Ajayi and Tyronne Ebuehi of Italian Serie A side Venezia.

Dennis was not part of Nigeria's initial 37-man provisional squad submitted by former coach Gernot Rohr, but added to the 40-man party in December.

His inclusion in the final squad led to Watford manager Claudio Ranieri revealing the club could refuse to release him.

Ranieri said Nigeria missed a deadline to advise the Premier League club that the forward was being considered for selection.

The NFF conceded it may have left it late and is now in a weakened position to request Dennis to travel.

Despite being keen to travel to Cameroon for the continental showpiece, Osimhen officially informed interim coach Augustine Eguavoen about his decision to withdraw on Thursday.