Ighalo ruled out of Africa Cup of Nations after not released by his club. 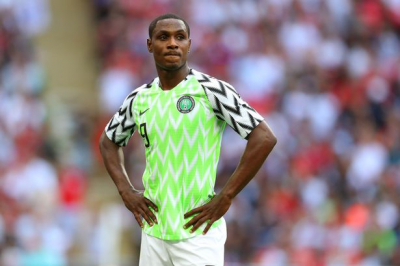 Nigeria look set to be without striker Odion Ighalo at the Africa Cup of Nations after his Saudi Arabian club Al Shabab refused to release him for the tournament in Cameroon, which starts on Sunday.

The 32-year-old, top scorer at the last Nations Cup in 2019, was initially given a deadline of Tuesday to confirm his availability by interim Super Eagles coach Augustine Eguavoen.

However, Ighalo was not part of the squad that landed in Garoua late on Wednesday after Al Shabab objected to their top scorer's involvement and reiterated that the Nigeria Football Federation (NFF) missed the official deadline to call up the player.

The Riyad club official Majid Al-Marzouki told Al Arabiya's In the Goal TV program that Ighalo's letter of invitation did not reach the club within the period specified by world governing body Fifa for receiving players' call-up letters.

"The Fifa Player Status Regulations stipulates that the federation must notify the player and his club in writing of his summons 15 days before the start of the tournament, and it is advised to send a copy to the local federation of the club as well, which did not happen," Al-Marzouki said.

"Accordingly the coach [Pericles Chamusca] told us that the player will stay with us and will not join the Nigerian team.

"There are no negotiations between us and the Nigerian federation, and the player is committed to the decision. The situation is settled."

Article 72.2 of the Confederation of African Football's tournament regulations state: "A player on the final list cannot be replaced unless seriously injured at the latest 24 hours at least before the beginning of the first match of his team."

Nigeria were hoping Ighalo, currently the leading goalscorer in the Saudi Pro League season with 11 goals for Al Shabab, could reproduce his club form at the continental showpiece football event.