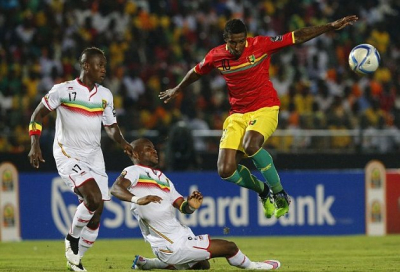 Guinea opened their Africa Cup of Nations campaign with a 1-0 win over a spirited Malawi side.

The only goal came when left-back Issiaga Sylla slotted in 10 minutes before the break after good hold-up play by striker Jose Kante.

Yet the West Africans had keeper Aly Keita to thank for a string of saves in their Group B encounter in Bafoussam.

He pushed over three long-range strikes in the first half and later bravely dived at the feet of Yamikani Chester.

Guinea, captained by Liverpool midfielder Naby Keita, join Senegal at the top of the group on three points after the Teranga Lions beat Zimbabwe earlier.

Malawi, appearing at their first Nations Cup since 2010, were composed on the ball and had a glorious chance to take the lead from a one-on-one but striker Chester scuffed his shot straight at Keita.

Guinea then saw defender Ibrahima Sory Conte head against the upright before Sylla broke the deadlock.

Keeper Keita had to be alert to keep out Micium Mhone's 30-yard drive, Limbikani Mvaza's 35-yard free-kick and Peter Banda's curling effort from outside the box before Malawi's Ernest Kakhobwe made a smart double-save to deny Aguibou Camara at the end of the first half.

Both sides were without players because of positive Covid-19 tests, but Malawi were only able to name four substitutes and have called up several reserve players to bolster their squad.

More in this category: « Algerian journalists want to stay on at Nations Cup despite knife attack. Sofiane Boufal strikes late as Morocco beat Ghana in Africa Cup of Nations. »
back to top