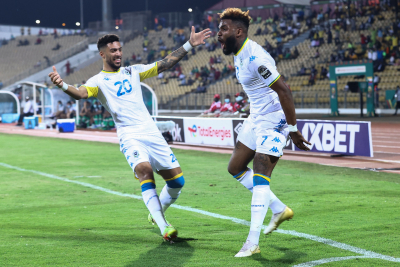 Aaron Boupendza's first-half finish was the difference as Gabon edged past Africa Cup of Nations debutants Comoros in Group C.

Gabon forward Louis Ameka latched on to a loose ball before playing in Boupendza to strike from a tight angle after 16 minutes.

Comoros, the Island nation in the Indian Ocean who qualified ahead of Kenya and Togo, dominated proceedings before Gabon's opener against the run of play.

Only three of 11 newcomers have reached the knockout rounds since the turn of the century, although Madagascar did make it to the quarter-finals at the first attempt in 2019.

But once the two-time quarter-finalists went in front it was one-way traffic, even without star player Pierre-Emerick Aubameyang who missed this match after testing positive for Covid-19.

Comoros did cause one scare late in the second half when Gabon keeper Jean-Noel Amonome shovelled a long-range shot narrowly past his right-hand post.

Gabon will be hoping Aubameyang can return in time to face Ghana in their second match on Friday, while Comoros have their work cut out with upcoming opponents Morocco ranked 104 places above them.

More in this category: « Sierra Leone holds defending champions Algeria to 0-0 draw. Algerian journalists want to stay on at Nations Cup despite knife attack. »
back to top