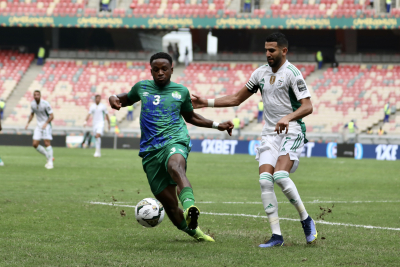 Algeria began the defence of their Africa Cup of Nations title with a goalless draw against a stubborn and spirited Sierra Leone side in Group E.

After the break Algeria forward Yacine Brahimi shot straight at keeper Mohamed Nbalie Kamara, who also tipped a low shot from Riyad Mahrez past the post.

The draw saw Algeria extend their unbeaten run to 35 senior internationals, edging closer to Italy's world record of 37 matches without defeat, but coach Djamel Belmadi will be frustrated his charges failed to find a way past a side ranked 108th in the world.

The Desert Foxes continually carved out opportunities in the second half but were let down by their finishing - with substitute Said Benrahma skewing a shot wide with five minutes remaining after coming off the bench.

Bensebaini cut into the box and had his low shot gathered by Nbalie Kamara in the first minute of injury time before striker Bounedjah sent a free header from a corner straight at the Leone Stars number one, who sank to his knees in celebration at full-time.

There were occasions where the Sierra Leone keeper had ridden his luck in Douala's Japoma Stadium, having frequently come to the edge of his box in an attempt to cut out danger.

Nbalie Kamara pulled off a successful sliding block tackle on Islam Slimani in first-half stoppage time and, midway through the second half, saved a shot from Manchester City winger Mahrez just inside his area following a weak header clear.

After Slimani had shot into the side-netting from a narrow angle for the north Africans early on, Sierra Leone almost took a shock lead when striker Kamara flashed a snap-shot wide from 10 yards.

He nodded narrowly wide from a free-kick midway through the half and Mohamed Buya Turay tested Algeria keeper Rais M'Bolhi from 25 yards.

Kamara also had a goal ruled out for offside just after the restart before Algeria began to take full control of the game.

Former Tottenham defender Caulker, making his competitive debut for the Leone Stars, brilliantly deflected an attempt from Sofiane Bendebka behind for a corner and later charged down another shot from the forward.

The Sierra Leone rear guard action which secured a point gives the West Africans hope of progressing out of a tricky group and into the last 16.

Both sides are back in action on Sunday, when Algeria face Equatorial Guinea and Sierra Leone take on Ivory Coast.

More in this category: « Cape Verde earn vital three points in Africa Cup of Nations opener against Ethiopia. Gabon clinch 1-0 victory over debutants Comoros despite Aubameyang's absence. »
back to top