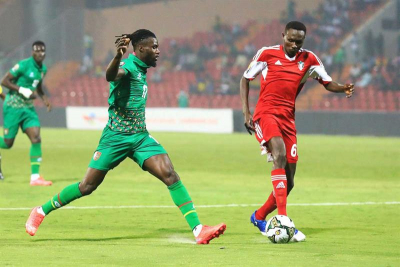 Guinea-Bissau missed a late penalty as they were held by Sudan in their Group D opener in the Africa Cup of Nations.

Midfielder Pele saw his 82nd-minute spot-kick kept out by Sudan goalkeeper Ali Abou Achrine, with Piqueti striking the bar on the rebound.

Abou Achrine had been adjudged to have fouled Steve Ambri inside the area.

Guinea-Bissau's Joseph Mendes also hit the post with a first-half header and Frederic Mendy saw an effort cleared off the line late on.

The result means Guinea-Bissau have failed to score in each of their past five Nations Cup matches and now face an uphill battle to reach the knockout stage for the first time.

The Secretary Birds sacked former boss Hubert Velud last month after a disastrous showing in the Arab Cup where they conceded 10 goals and failed to score across their three games.

Mohamed Abdelrahman went closest for Sudan, forcing a good stop from Guinea-Bissau goalkeeper Maurice Gomis on the stroke of half-time.