Cameroon aims to boost Last 16 hopes with a win over Ethiopia. 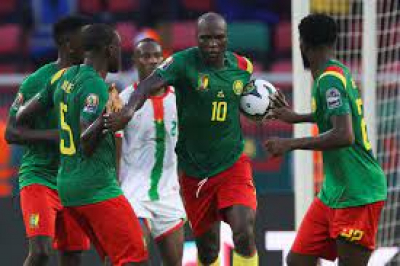 Cameroon will battle it out with Ethiopia in a 2021 Africa Cup of Nations (Afcon) Group A match at the Stade Omnisport Paul Biya in Yaoundé on Thursday.

The Indomitable Lions began their Group A campaign with a 2-1 win over Burkina Faso on Sunday with captain Vincent Abubakar scoring twice to inspire his nation to a come-from-behind victory.

Cameroon, who are the tournament hosts, will now be looking to maintain their lead at the top of group standings with a win over Ethiopia and boost their hopes of reaching the knockout phase.

Antonio Conceiçao, the Indomitable Lions' head coach, stressed the importance of winning their game against Burkina Faso which has boosted his charges' confidence ahead of the clash with Ethiopia.

"This victory was important for us, in order to start the tournament well," Conceiçao said after their encounter against Burkina Faso.

"We played at home, in front of our home crowd. The players played a positive game. We started the game controlling the opposing team, we had possession but they managed to score.

"This goal could have weakened the team but it reacted well. We were able to reverse the match. I think it's a deserved victory because in the second half we had more chances to score."

Meanwhile, Ethiopia were narrowly defeated 1-0 by Cape Verde in their opening Group A match with Julio Tavares scoring the only goal of the match for the Blue Sharks on Sunday.

Walia Ibex, who won the 1962 Afcon title, cannot afford to record another defeat when they take on Cameroon as they are currently placed fourth on the group standings.

Wubetu Abate, the Ethiopia head coach, was left to rue Yared Bayeh's red card against Cape Verde and he hopes they can take some positives from the game into their clash with Cameroon.

"We lacked experience against a good Cape Verdean team," Abate as he reacted to their slender loss to Cape Verde.

"A defeat is true but we will learn lessons for our next matches. We played almost the entire game in numerical inferiority and that did not help us. helped especially physically."

The last meeting between Cameroon and Ethiopia was on 21 January 2016.

Cameroon drew 0-0 with Ethiopia in the 2016 African Nations Championship Group B match which was played at the Stade Huye in Rwanda.

More in this category: « Mali beat Tunisia but chaos as referee ends game early twice. CAF gathering reports from officials after AFCON game between Tunisia and Mali. »
back to top