Caf discuss state of pitch in Douala with possibility of moving matches. 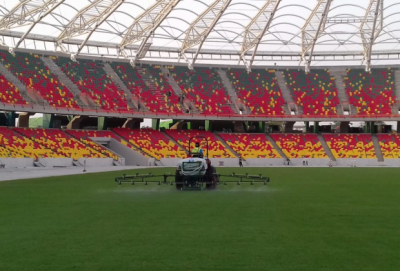 The Confederation of African Football (Caf) is still in discussions regarding the poor state of the pitch in Douala and whether Africa Cup of Nations matches may need to be moved from the arena.

Cameroon's largest city has hosted just four games so far at the Japoma Stadium, with another six to come.

These include a semi-final, two quarter-finals and a last 16 clash.

Each of the six stadiums being used for the tournament has hosted two matches back-to-back on the same day.

The state of the pitch in Douala was thrown into focus by Sierra Leone's last-gasp equaliser against Ivory Coast in their Group E meeting on Sunday.

Ivorian goalkeeper Badri Ali Sangare was caught out as he seemingly lost his footing as he attempted to smother the ball to prevent it going for a corner only to fumble it into the path of gleeful goalscorer Alhaji Kamara.

Even then the Denmark-based forward had to recover from his own slip on the surface in order to put the ball into the open goal.

Later that evening, defending champions Algeria were beaten 1-0 by Equatorial Guinea in a scrappy encounter.

Algeria coach Djamel Belmadi, whose team have played both their games on the pitch so far, criticised the playing surface from the first day it hosted games.

Algeria are due to play their group decider against Ivory Coast in Douala on Thursday (16:00 GMT), with the Desert Foxes needing victory to have a chance to progress to the last 16.

Meanwhile Tunisia could be without 12 players for their pivotal Africa Cup of Nations Group F game against The Gambia on Thursday because of coronavirus.

Captain Wahbi Khazri, who scored two goals in his country's 4-0 win over Mauritania on Sunday and set up another, is among seven players who have tested positive.

The Carthage Eagles need at least a point against The Gambia to have a chance to progress as one of four best third-placed sides, while victory would secure a spot in the last 16.

More in this category: « Aubameyang to return to Arsenal from AFCON after Covid-related health problems. Naby Keita screamer in vain as the Warriors secure shock win. »
back to top