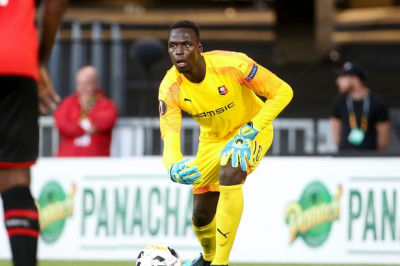 The 26-year-old, who is on international duty at the Africa Cup of Nations, beat the likes of Italy's Gianluigi Donnarumma to the award on Monday.

"It's a really special moment for me, for my family," Mendy told Senegalese media.

"It's a part of history because it's the first time that an African goalkeeper received this distinction. So today, I feel immense pride, pride in the name of Senegal but also Africa.

"I hope that over time in the years to come, other goalkeepers like myself will continue to ink the pages of global football. Honestly, I'm so happy to receive this trophy with my team-mates."

It is the latest accolade for Mendy, who was also named Uefa's goalkeeper of 2020-21 last August.

"It's something nice for us - we have a big man in front - he is taking the lead and congratulations to him."

Mendy missed the start of the Nations Cup in Cameroon after testing positive for coronavirus, but returned for Senegal in their 0-0 draw with Malawi on Tuesday, which confirmed their progress to the last 16.

And the keeper received his Fifa trophy in front of the rest of the Teranga Lions squad.

"I lived it the best way possible," he said.

"Really proud, with my brothers, with all the people working around this national team. It was a great thing to receive it in the (lions') den.

"Now there isn't much time to celebrate. We have other things to think about. And the most important is to stay focused in the tournament."

Senegal were Nations Cup runners-up in 2019 and were among the pre-tournament favourites to lift the trophy this year.

The West Africans finished top of Group B after going unbeaten but Aliou Cisse's side have been unconvincing so far, scoring just one goal in their three matches.

That strike came from a 97th-minute penalty against Zimbabwe, but Mendy says reaching the knock-out stages is the "most important" thing.

"We are in a very tough tournament and it's not always the most beautiful to watch," he added.

"We have five points, we didn't concede, we are first. We have a lot of things to help us stay positive.

"We had 10 players impacted by Covid. We don't all have the same level of fitness. We don't have the quality of play, but you are at the Africa Cup of Nations - you will never have this."

Senegal will face a third-placed side from Group A, C or D in the last 16 on Tuesday, 25 January.