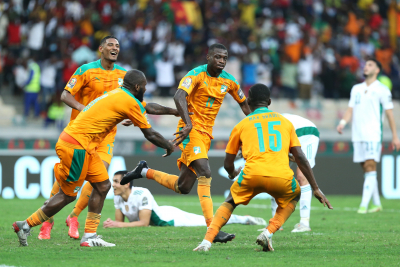 Defending champions Algeria crashed out of the Africa Cup of Nations with a 3-1 defeat against Ivory Coast in Douala.

Needing a win to stay alive, Algeria trailed by two goals at the break after Franke Kessie capped off a fine move and Ibrahim Sangare headed home.

Arsenal's Nicolas Pepe put the Ivorians 3-0 up before Algeria captain Riyad Mahrez hit a penalty against the post.

Algeria, for whom Sofiane Bendebka scored a late consolation, exit bottom of Group E after a torrid display.

Djamel Belmadi's men are the third holders to exit at the first hurdle in the past five Nations Cup finals.

Their departure from the competition is in marked contrast to their entry, travelling to Cameroon on a 34-match unbeaten run and looking to surpass Italy's all-time record of 37.

The Algerians had drawn 0-0 with Sierra Leone before a 1-0 defeat by Equatorial Guinea, and leave with just one point from three games - but did at least finally get on the scoresheet in Cameroon when substitute Bendebka's late goal inspired a brief rally.

Ivory Coast's Elephants topped the group to line up a mouth-watering Round of 16 clash with Egypt, scheduled for Douala on Wednesday 26 January.

Meanwhile Equatorial Guinea reached the last 16 at the Africa Cup of Nations after beating Sierra Leone 1-0 - a result which eliminated the Leone Stars.

Midfielder Pablo Ganet curled in from the edge of the area to net the only goal seven minutes before the break.

The Equatoguineans finish second in Group E behind Ivory Coast.

Juan Micha's side will now face the winner of Group F - any one of The Gambia, Mali and Tunisia - on Wednesday, 26 January.

The late missed penalty was harsh on Kamara, the 37-year-old who had scored the winner against Sierra Leone last June which had Sierra Leone's qualification for the tournament.

The former Norwich City and Middlesbrough man had been handed the responsibility after Ganet had brought down Issa Kallon, but Owonu launched himself to his left to claw Kamara's attempt past the post.

The Leone Stars, making their first appearance at the Nations Cup since 1996, had drawn their first two games against defending champions Algeria and two-time winners Ivory Coast to give themselves a chance of going through.

Yet they struggled to create meaningful chances in Limbe, although Steven Caulker headed across goal and wide just after the hour mark as they sought an equaliser.

Sierra Leone had Kwame Quee sent off late on for a second bookable offence and their result,coupled with Algeria's 3-1 defeat by Ivory Coast,means Tunisia and debutants Comoros are guaranteed their own spots in the knock-out stages.

Comoros go through as one of four best-ranked third-placed teams, while Tunisia - also among the top third-placed sides - could yet secure a top-two finish in Group F.

The Carthage Eagles face The Gambia in their final group game in Limbe later on Thursday (19:00 GMT).

Qualification for the knock-out stages is a remarkable achievement for Comoros, ranked 132nd in the world.

More in this category: « Pharaohs through to AFCON knockout stages thanks to Abdelmonemo's winner. Debutants Gambia upset Tunisia in another Afcon shock. »
back to top