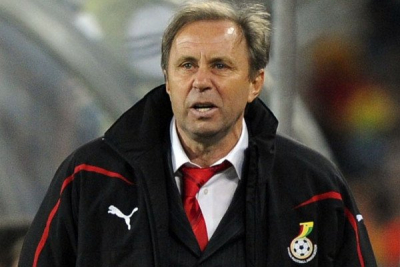 The decision was taken by the Ghana FA on Saturday morning.

This comes less than 12 hours after the Sports Minister ordered a massive overhaul of the team's backroom staff the Black Stars rare first round exit from Africa's flagship football tournament.

Ghana suffered a dismal tournament under the Serbian, taking only a single point from games against Morocco, Gabon and Comoros and finishing bottom of their group.

The 3-2 defeat to Comoros in a game they needed to win to qualify for the last 16 marked one of the lowest points in the national team's history.

Rajevac was re-appointed for his second spell as Ghana boss in September 2021 and initially did well, successfully taking Ghana out of the second round of World Cup qualifying with a controversial win against South Africa.

However, following their Afcon performance, Rajevic will not continue.

It is now expected that he will be replaced with an interim coach as the Black Stars prepare for the final qualifying games for Qatar 2022.

The Black Stars will face Nigeria following a draw in Cairo on Saturday.

Meanwhile Comoros face a goalkeeping crisis before the biggest game in the country’s history on Monday.

The tournament debutants play hosts and five-time champions Cameroon in Yaounde on Monday, but their camp has been hit by 12 positive Covid cases including coach Amir Abdou.

Seven players have been affected, including the two remaining fit keepers in the squad, Moyadh Ousseini and Ali Ahamada, with first-choice Salim Ben Boina out through injury.

"We will do everything in our power to find a solution," said general manager El Hadad Himidi.

Himidi added: "It’s the coach and the only fit goalkeepers, so the situation is really complicated."

The Confederation of African Football (Caf) ruled before the tournament that teams affected by Covid must play matches even if they have no recognised goalkeeper in their squad.

"A team will be required to play a match if they have a minimum of 11 players available who have tested negative,"stated Caf.

"In the event of the absence of a goalkeeper, another player from the team must replace the goalkeeper, provided the total number of available players is at least 11.

"In exceptional cases, the Organizing Committee of the Africa Cup of Nations will take the appropriate decision."

Comoros will hope the injury suffered by Ben Boina could be considered an exceptional case, given the keeper had to leave the field after a red-card challenge by Ghana captain Andre Ayew in Tuesday's Group C tie.

More in this category: « Stunning Gradel gives Ivory Coast victory over Equatorial Guinea. Comoros will play without a recognised goalkeeper for last-16 tie with Cameroon. »
back to top