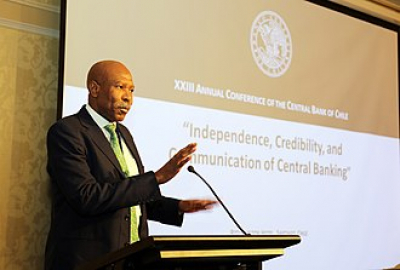 The South African Reserve Bank (SARB) is anticipated to keep interest rates at historic lows in May, data from a new Reuters poll shows.

South Africa’s Monetary Policy Committee (MPC) will meet next week, with a rates announcement expected on Thursday (20 May).

All 25 economists surveyed by Reuters this week said the central bank would keep its repo rate at a record low 3.5%.

Survey medians suggest the Reserve Bank will hike rates by 25 basis points to 3.75% either in January or March next year followed by another quarter of a percentage point rise either in July or September 2022 to 4%.

The monetary policy committee has cut the benchmark interest rate by three percentage points since the start of 2020, of which 275 basis points of easing was in response to the impact of Covid-19 on the economy.

That’s taken the rate to a record-low 3.5%. March’s decision was the first time since the 2020 rate cuts in which no member voted for a reduction and expectations have now shifted to when the first hike will come.

The Reserve Bank is likely to maintain its accommodative monetary policy stance to support the economy for as long as it has room to do so, said governor Lesetja Kganyago in an April interview with Bloomberg.

While the implied policy rate of the central bank’s quarterly projection model, which the MPC uses as a guide, indicates two rate increases this year of 25 basis points each — May and in Q4— policymakers see risks to the inflation outlook as balanced and feel that they can continue to offer support to the economy, Kganyago said.

Twitter
More in this category: « How to Rehabilitate your Credit Record as a Tenant. A marginal petrol price hike expected next month. »
back to top