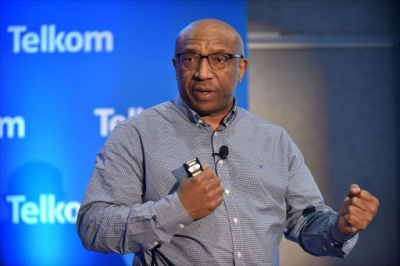 Telecoms operator Telkom on Monday (24 May) published its financial results for the year ended March 2021, showing a recovery in full-year headline earnings, spearheaded by its mobile division.

Group revenue grew marginally by 0.4% to R43.22 billion in a challenging operating environment. The group’s mobile business was the main contributor to revenue growth with service revenue growing by 34.5%.

Migration to work-from-home impacted the Enterprise fixed business as fixed usage diverted to mobile connectivity, leading to a 25.1% decline in fixed voice revenue, it said.

Furthermore, due to enterprises remaining under severe financial pressure as a result of the Covid-19 national lockdown, enterprise customers reduced or deferred their spend on IT, resulting in a 12.7% decline in IT revenue, Telkom said.

Earnings before interest, tax, depreciation and amortisation (EBITDA) was up 11.7% to R12 billion with EBITDA margin at 27.7%.

Telkom Group chief executive officer Sipho Maseko said that the group’s commitment to enabling connectivity meant it was perfectly placed to support the digital transformation and play a key role now and in future in ensuring that the digital world remains open, even when the physical world remained in shutdown for a considerable period.

"Our mobile business continued its growth trajectory as we surpassed 15 million subscribers during the year, carrying even more data traffic in 4G and 4,5G, as well as commencing our 5G rollout." said Maseko.

"Allocating capital to a data-led and fibre-enabled mobile networks – a growth area of our business – successfully prepared us for the significant increase in data demand and mobile broadband services as more people worked, did business and studied from home."

The challenging economy had an impact on the overall post-paid base, but it remained relatively stable, growing by 0.7% to 2.6 million with an ARPU increase of 12.2% to R211, pointing to a distressed post-paid segment, Telkom said.

Telkom said it increased its mobile footprint, with site roll out up 9.7% to 6,430. Capacity upgrades, underpinned by the deployment of additional carriers and temporary spectrum, as well as ongoing spectrum refarming, resulted in the upgrade of 2,096 sites with temporary spectrum, 1,971 sites with additional carriers, 1,309 refarmed sites and 804 sites where LTE capability was improved.

Telkom’s BCX unit suffered a decline in revenue as the national lockdown and the work-from-home response impacted fixed-voice revenues from enterprise customers. Information technology (IT) revenue also came under pressure as corporates deferred capital expenditure (capex) and delayed projects given the increased levels of uncertainty.

As the country locked down, BCX successfully focused on optimising its cost base with a clear focus on cash preservation, resulting in EBITDA increasing by 6.6%, Telkom said.

Twitter
More in this category: « Reserve Bank keeps repo on hold,revises growth up to 4.2%. Avoid financial fraud when getting your vax. »
back to top