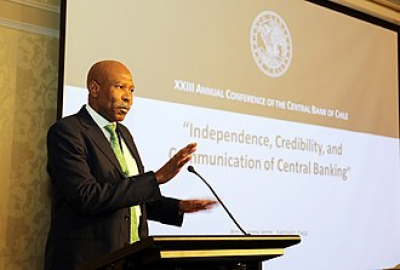 Born out of a banking crisis caused by unusual financial and monetary conditions during World War I, the South African Reserve Bank opened its doors on 30 June 1921.

Singled out by ratings companies and investors as a pillar of institutional strength in a country where graft and mismanagement of resources hollowed-out government organs over the past decade, the central bank fiercely guards its independence and has diligently worked to rein in inflation.

Buffers built by the bank, in part through lowering inflation expectations, allowed it to bring in unprecedented measures to offset the damage caused by Covid-19.

Now, with Africa’s most industrialised economy on track to recover from its biggest contraction in a century, its monetary policy committee is preparing to raise borrowing costs.

Policymakers cut the key interest rate by three percentage points in 2020, of which 275 basis points of easing was in response to the impact of the virus on the economy, taking it to a record low 3.5%.

The central bank’s quarterly projection model, which the MPC uses as a guide, indicates two rate increases this year of 25 basis points each and a key rate of 6.11% in 2023.

Even so, the policy stance will remain accommodative, according to deputy governor Kuben Naidoo.

"There is no contradiction between hiking rates and having an accommodative monetary policy," Naidoo said in an interview.

"At the moment, rates on a forward-looking basis are negative and quite highly negative – even if we raised it by 50 basis points, they remain negative. We can’t keep interest rates at 3.5% forever."

The timing of the first increase remains uncertain, even after inflation breached the midpoint of the central bank’s target range in May.

That’s as its model predicts consumer price growth will top 4.5% – where the MPC prefers to anchor expectations – in the second and fourth quarters of the year.

Governor Lesetja Kganyago has said the MPC will only step in to bring inflation under control if it sees a sustained deviation from the midpoint.

Forward-rate agreements used to speculate on borrowing costs suggest traders see the key interest rate higher by the fourth quarter, while nine of the 13 economists in a Bloomberg survey only expect hikes from the first quarter of 2022.

While markets are speculating about scope to lower the central bank’s 3%-6% inflation-target range, no talks about changes are currently taking place, Naidoo said.

The target, first announced 25 years ago, is set by the minister of finance in consultation with the central bank.

Raising borrowing costs too soon will likely draw criticism from politicians and labour unions, who’ve said the Reserve Bank should be doing more to support the economy and reduce unemployment.

It could also re-ignite a debate about nationalizing the SARB that could put the country’s reserves worth more than $50 billion at risk.

While shares in the central bank that only trade over the counter are worth about R29 million ($2 million), some shareholders have argued its assets belong to them and they should be compensated for that if the government takes it over.

Such a move – recommended by the ruling African National Congress – could ultimately affect the bank’s mandate and credibility.

Meanwhile the SA Reserve Bank’s management of monetary policy got a resounding endorsement from the head of the International Monetary Fund (IMF), crediting it with policies that enabled it to navigate the shock of the Covid-19 pandemic and resulting lockdowns.

Governor Lesetja Kganyago’s ability to keep inflation under control enabled the country to cut interest rates and support the economy in the past year, IMF MD Kristalina Georgieva said in a recorded message to mark the Bank’s centenary.

President Cyril Ramaphosa has commended the South African Reserve Bank (SARB) for its quick, bold, extraordinary and unprecedented response to the COVID-19 pandemic over the past year.

Over the past year, the SARB slashed the repo rate by over 200 basis points in an attempt to soften the blow on consumers affected by the effects of the pandemic.

Ramaphosa applauded the central bank’s response to the virus in a tribute as the institution on Wednesday celebrated a century of its existence.

South Africans, said the President, could be proud of its central bank as “an institution that has been unwavering in meeting its Constitutional mandate”.

"On behalf of the people of South Africa, I extend warm greetings and best wishes to the South African Reserve Bank on the occasion of its 100th birthday.

"The SARB has stood witness to some of the most dramatic events in our country from the Great Depression to World War II, from the election of the Nationalist Party government in 1948 to the declaration of the republic, from the Sharpeville massacre to the release of Nelson Mandela from prison and to the historic 1994 elections."

He said while the SARB’s existence and work predate the dawn of democracy in 1994, the manner in which it has carried out its democratic constitutional mandate, an obligation to the South African people’s desire for liberty and prosperity, "has been exemplary".

This was the assertion of Finance Minister Tito Mboweni on Tuesday during the central bank’s centenary celebration.

"At the National Treasury, our support comes in the way of developing a legal structure within which the regulatory authorities and the Reserve Bank can execute their mandate," said the Minister.

During his address, he reflected on his time as the country’s eighth governor between 1999 and 2009.

"It was in many ways a momentous occasion. Africa was indeed on a path of transformation and on a new path in South Africa where we would integrate the old and the new and still move forward as one country."

Pondering on his tenure, he said the bank’s task at the time was to repair the South African economy, gain investor confidence and enhance the functions and policy decisions of the SARB.

"As the work of the South African Reserve Bank is much easier with public support, it was necessary to improve the general public understanding of the role and functions of the central bank.

During this period, Mboweni said the importance of containing inflation took centre stage in the strategy to improve communication.

Twitter
More in this category: « Fuel price hikes now expected in the first week of July. Kulula, BA the latest airlines to cancel July flights due to Gauteng travel ban. »
back to top