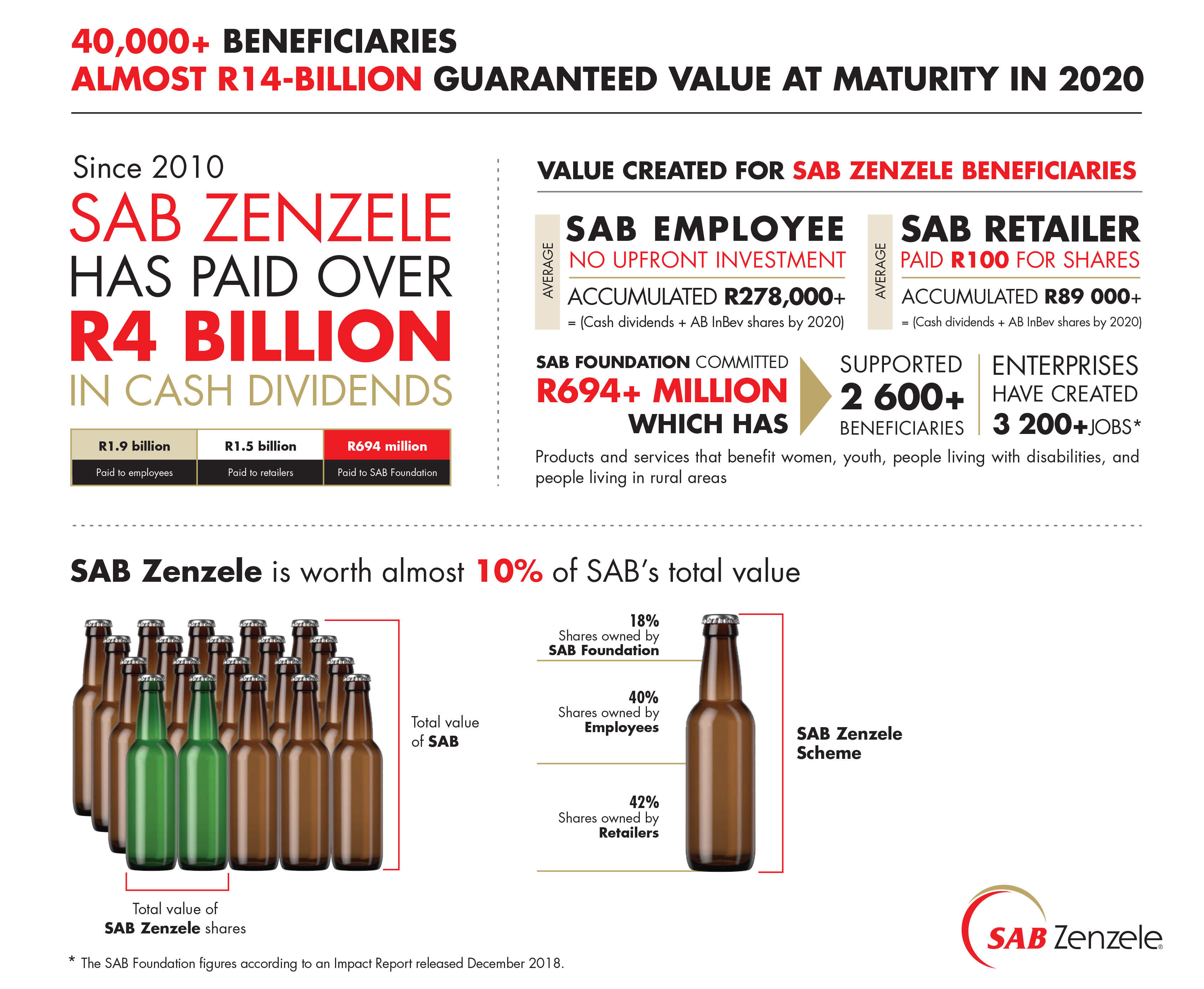 SAB Zenzele, the biggest B-BBEE scheme in the country’s FMCG sector*, will have generated almost R14-billion in net value for beneficiaries at the end of its 10-year investment period in April 2020.

Since its inception in 2010, SAB Zenzele has disbursed a total of R4-billion in cash dividends to its three shareholder groups, generating consistent and tangible benefits to its beneficiaries, and proving itself one of the most successful B-BBEE schemes in South Africa.

Created with a clear purpose of creating sustainable ownership and economic wealth opportunities for previously disadvantaged groups and redressing historical imbalances, the B-BBEE deal transferred 8.45% of ownership of SAB shares to more than 40,000 shareholders. Beneficiaries of the scheme are the SAB Zenzele Employee Trust, which holds shares for the benefit of SAB employees; the SAB Zenzele Holdings Limited, which holds shares for the benefit of black beer and soft drink retailers; and the SAB Foundation Trust, which supports entrepreneurship projects to benefit low-income communities.

“Looking back at SAB Zenzele’s 10-year track record, it is inspiring to see what has been achieved”, says Andrew Murray, VP Finance, SAB and AB InBev Africa. “From the outset, SAB Zenzele sought to be genuinely broad-based and to deliver real economic benefits to the lives of thousands of South Africans.  On behalf of the company, I am very proud of the degree to which SAB Zenzele delivers against this initial objective.”

In addition to the cash dividends paid out to date, beneficiaries’ participation rights will be transferred into shares in AB InBev, the world's largest brewer, at the end of the 10-year transaction period. “Beneficiaries will have a tangible stake in the global business so when, for example, a Corona is sold in Mexico, a Budweiser in the US or a Castle Lager in Johannesburg, they will own a piece of that profit,” says Murray.

Tweet
More in this category: « Nestlé empowers “Coffee Bae” and the community of Sasolburg with a mobile art studio. Telkom has confirmed that it is in talks to buy Cell C. »
back to top