A R74 billion 'green' plan has hit the wall of South African politics. 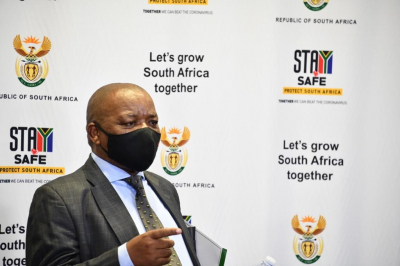 The world’s richest countries are courting South Africa as a model of how to transition to a more climate-friendly future from a dependency on coal.

While $5 billion (R73.7 billion) of cheap loans and grants are on offer as a first step, transforming Africa’s most industrialized economy demands more than cash.

It needs to win over power brokers like Gwede Mantashe, a former coal unionist who is now energy minister and chairman of the ruling African National Congress, to weaken the nation’s reliance on the black rock.

A leading member of the South African Communist Party who also completed his MBA this year, Mantashe has made it clear saving the planet isn’t his highest priority.

Envoys from nations including the US, Britain and Germany met government ministers in Pretoria last month with the $5 billion package to hammer out a deal that could be announced at the upcoming COP26 global climate conference on ending the use of coal.

But Mantashe didn’t turn up. The 66-year-old was hundreds of miles away, addressing a mining investment conference and arguing against attempts to curb use of the country’s massive coal resources. Instead, he called for investing in experimental technologies to cut emissions from coal.

He’s hardly an outlier. Coal, mainly mined in the eastern province of Mpumalanga, has underwritten the system of political patronage and Black economic empowerment that has kept the ANC in power since the end of apartheid.

"We industrialized on the back of coal," said Jesse Burton, a Cape Town-based senior associate at climate-research group E3G. "Coal is the backbone of our economy," she said, while noting it’s no longer the cheapest form of energy.

The fuel supplies 82% of South Africa’s power, and businesses that rely on energy sourced from coal account for 45% of employment and 70% of exports, according to Roger Baxter, chief executive officer of Minerals Council South Africa, which represents most mining companies.

Coal-trucking firms alone, many of them black-owned, employ 5,000 people. Black shareholders now own a third of the companies that supply coal to state-owned power monopoly Eskom Holdings.

Which helps explain why the politics are so potentially explosive.

President Cyril Ramaphosa, who co-founded the National Union of Mineworkers in the 1980s, has set up a powerful commission to guide the country toward lower emissions and more renewable energy. But he also relies on Mantashe, a bulwark against his rivals in the six-member group that runs the ANC.

"He is Ramaphosa’s only ally in the top six. The rest have all got knives out," said Burton. If the dependency of the ANC on coal mining rents is as great as everyone believes it to be, you need someone like Mantashe to manage it."

That means maintaining support of the unions. Eskom employs more than 42,000 people, many of them at its 15 coal-fired plants; coal mines provide jobs for almost 90,000.

The unions backed Ramaphosa in his ascendancy to the top of the ANC and remain on his side, which gives Mantashe even more leverage.

"He knows the levers he controls," said Ralph Mathekga, an independent political analyst and author of books about the ANC. "That’s why he has the audacity to press his agenda. Look at how one man’s energy view is holding back the president’s agenda on energy."

"In South Africa, there is no one who argues against moving from high-carbon emissions to low-carbon emissions, including coal companies," Mantashe said in an interview. "Where there is a debate, is navigating through the transition. We must navigate it carefully without hurting ourselves."

As for skipping the 28 September meeting with climate envoys, Mantashe said it didn’t directly involve his portfolio. "It was not a beauty contest among ministers," he said.

Mantashe said he backs technology that can mitigate coal emissions and is pushing for the development of the nation’s gas fields.

Tyrone Seale, acting spokesman for Ramaphosa, cited the president’s views in the 11 October of a weekly letter to the nation.

He spoke of the dangers of climate change and the need to cut emissions and win aid. He warned that if South Africa’s doesn’t reduce its reliance on fossil fuels, it may face difficulties exporting its products.

Weaning South Africa off coal is seen as critical, as is providing a model to other developing nations as the urgency of transitioning to greener energy mounts.

Remodeling South Africa’s power industry would be cheaper than in other coal-dependent nations since many of the country’s coal-fired plants are nearing the end of their life.

Civil- society groups and the government have also been researching how to cushion the impact of those closures on coal-dependent communities for a number of years and opposition to coal on environmental grounds has been growing.

"Because the closures are coming already, that provides an opening and a space to have this conversation, to think about planning, what you can do," said Burton.

Wherever it goes, the energy transition would likely get tangled up in the web of patronage and political influence that dominated the era of so-called state capture under ex-President Jacob Zuma, who was ousted in 2018.

A probe by the government’s Special Investigating Unit into Eskom’s coal-buying practices showed that a coal shortage that started in 2007 was self-inflicted and led to a proliferation of small supply deals. The result: Coal costs rose, quality fell and tender procedures were flouted, it said.

In 2015, Hitachi agreed to pay $19 million to settle US Securities and Exchange Commission charges that it made "improper payments" to South Africa’s ruling party to help it win contracts in the construction of coal-fired power plants.

That same year, then Energy Minister Mosebenzi Zwane intervened to secure the sale of coal mines that supplied Eskom to a company controlled by the politically linked Gupta family and Zuma’s son Duduzane.

Eskom said law-enforcement agencies are investigating its coal contracts and one has been canceled as a result.

While not all the coal deals are tainted by corruption, the industry is nevertheless deeply entwined with politics.

Mike Teke, CEO of Seriti Resources Holdings, which supplies 32% of Eskom’s coal, said he gave Ramaphosa’s 2017 campaign for the ANC presidency R600,000 ($40,000) as he, and other business leaders, supported the president against a rival backed by Zuma.

One of Seriti’s biggest shareholders, Thebe Investment Corp, was established in 1992 by a company whose chairman was Nelson Mandela. Former ANC Finance Minister Nhlanhla Nene sits on its board.

"Many of the companies associated with the coal-mining industry in South Africa have significant influence within the ANC," Shridaran Pillay, Africa director at risk advisory service Eurasia Group. "The downstream industries supported by mining play a role supporting regional political elites."