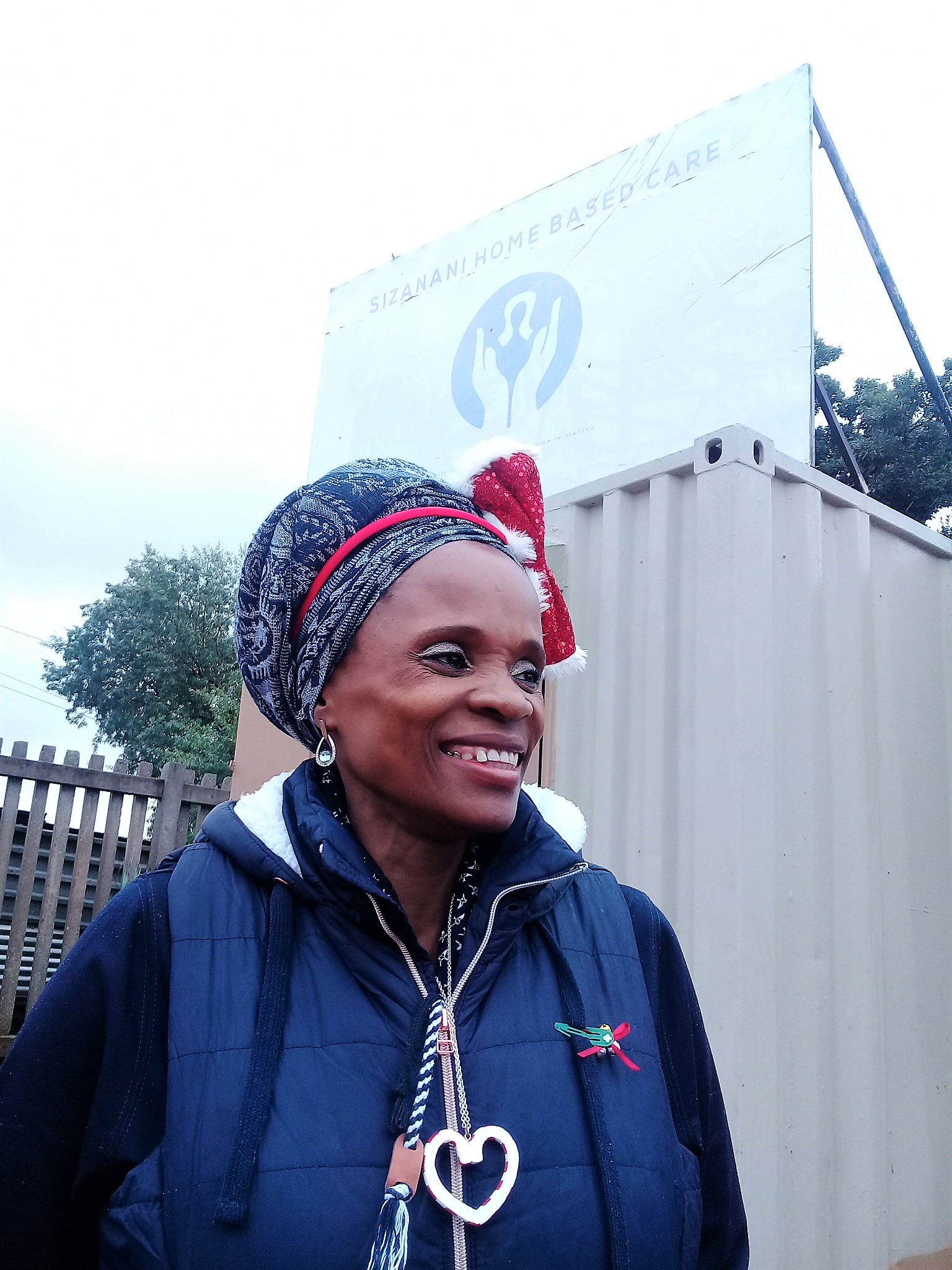 In the spirit of International Volunteer Day for Economic and Social Development and on the 10th anniversary of Kentucky Fried Chicken’s Add Hope initiative, all roads – for the fast-food brands representatives, personnel of publicity company, Edelman and the ubiquitous media corps – lead to Sizanani Home-based Caregivers in Meadowlands, Soweto.

On a grey overcast Thursday with a gentle drizzle reminding attendees’ pulses of the summer season, the eager entourage was warmly welcomed by the centre’s purposeful staff as well as its down-to-earth manager, Florence Kgomo.

In a succession of rolling interviews conducted with various media outlets on the centre’s premises, Kgomo familiarized their mission thus, “We’ve got 300 beneficiaries funded by DSD (Department of Social Development) and 140 who are not funded – the 140 get meals because of Add Hope.   Add Hope contributes money every year.  On a day-to-day basis, we feed anything from 200 to 250, we find that some kids either fail to show up or arrive late at the centre on some days.  But otherwise, the number we sit with at this point in time – we have 300 that is funded, that is documented, and that we know of.”

Expounding further, she intoned that if children visited the centre daily, it served to indicate that there was a need on their part – with this translating in her entity doubling efforts in fund-raising endeavours geared at ensuring that hungry tummies were taken care of.  “The majority of the children”, Kgomo indicated, “come from what used to be Mzimhlophe Hostel, but what is now referred to as, Meadowlands Zone 11.”“Where they come from lacks even a playground – their safe place is for them to come to Sizanani.”

Add Hope started its association with Sizanani in 2017.  The centre also provides girl children with dignity packs, which include sanitary pads, soaps and miscellaneous necessities.  The benevolent Kgomo touched a chord on the sadness of being entrapped in poverty when she mentioned that caregivers under her wing had had to attend to girls as young as nine, who have had to be assisted through the provision of such packs.  Listing other challenges confronting her centre, Kgomo also mentioned that their call of duty also extends to assisting the children with identity documentation.

Sitting in an office surrounded by trophies and certificates of recognition from various agencies and local and overseas governmental departments – as testament of the commendable service dispensed from the centre – the manager mentioned that she helmed a staff compliment of 42 caregivers, six cooks, 19 home-visiting caregivers, 3 auxiliary social workers (who assess environs under which the children are brought up), a poverty-alleviation coordinator and a coordinator responsible for kids.Her evidently dedicated staff including herself, she indicated, are paid by the DSD in the form of a stipend.

Kgomo intimated that she learned the ropes of managing such a community operation from her now late mother, Elizabeth Rapulane – who started the centre in 1999.  Rapulane initially concerned herself with home-based care where she went around neighbourhoods attending to the hygiene of the elderly – with her children, Florence among them, accompanying her.  It was through the encountering of conditions of malnourishment which people she called in on were subjected to which prompted Kgomo’s mother to add a feeding scheme to her home caregiving endeavours.

The family would cook food from their Mzimhlophe home, and then walk across the Soweto Highway to Sizanani’s location to dish up for ten kids, whereupon their numbers multiplied weekly until - after discovering that the DSD provided funding for precisely the sort of operation they were running - they began receiving funding from 2004.

Relating past experiences which could only emanate from the Holy Writ and from which her family could be cast as Good Samaritans, Kgomo recalled that before the Department of Social Development came on board, herself and her mom basically fed the multitude of mouths which descended on their premises (a collective of shipping containers serving as offices, kitchen and storeroom utilizing a generator and gas for energy) out of whatever funds they could scrounge from her sewing business and Rapulane’s volunteering services!

Around the period of the pervasiveness of HIV/AIDS, a pattern developed where numerous households ended up being headed by children and the situation became so dire that Kgomo’s family found themselves having to accommodate some 30 orphans.

It was in 2015 upon her mother’s passing that, although now solely involved in her own business since 2008, she was faced with the hard questions of Life: do I go on with my life, as if nothing had happened – then what?  Kgomo ultimately mitigated the poser brought about by the leadership void by making the decision of taking over management of the centre.

On this day, International Volunteer Day for Economic and Social Development, every adult spread around the centre’s premises were very much going about their various assigned chores in the spirit of the designated day: media practitioners were busy packing 400 party packs for the children for their Christmas party to be held on the following day, Friday; others helped in cooking and serving the children the meal of the day (samp, chicken stew and macaroni salad) and in thereafter washing the dishes; others stationed in different containers rearrange library books and cleaned toys.  Inside a huge adjacent hall from which issued forth the sound of the hundreds of children’s frolicsome noises, other volunteers engaged some of them in board games such as Monopoly.  There was also the option of joining care workers for home visits.

Ahead of the media’s visit at the centre, the organizers of the event issued forth electronic versions of the Child Protection Policy documents which served to guide them on the dos and don’ts, such as not showing the children’s visages be it on still or video imagery, inter alia.

3.2 million South African children do not get enough food in order to grow and learn.  In 2009 KFC added a new item to its menu: hope.  KFC’s Add Hope campaign collects donations in-store to fund meals for undernourished children.In any of its stores, customers can buy a side item for just R2 which goes towards feeding a child.  It’s a small amount, but it makes a big difference to a hungry little one.  Through 138 beneficiaries,such as Sizanani, which Add Hope supports, 150 000 children get fed every day through the R2 and KFC’s contribution.

With the help of ordinary South Africans, Add Hope has raised 321 million rand over the past seven years. The campaign commands awareness levels of over 75% amongst consumers, who say that they’re more likely to buy from KFC because of Add Hope – whilst 93% of the brand’s staff say that they feel good about the way KFC contributes to the community.

Tweet
More in this category: « Motorists will have to dig deeper into their pockets at the pumps,as the petrol price is set to go up. Massmart could cut up to 1,440 jobs under a plan to close some stores. »
back to top