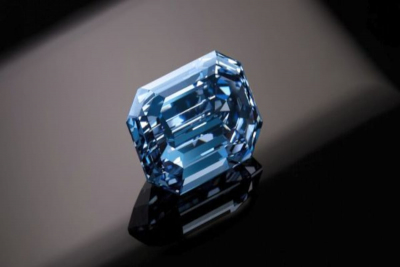 The De Beers' Cullinan blue diamond has been auctioned for HK$450.9 million (R911 million) at Sotheby’s in Hong Kong.

The 15.1 carat, fancy vivid blue diamond was sold Wednesday evening to an unnamed buyer. The step-cut gem, recovered from the Cullinan mine in South Africa, is the largest vivid blue diamond ever to appear at an auction. Bidders had pushed the price to HK$390 million, while auction premiums added the rest.

Records have been broken repeatedly in recent years for fancy coloured diamonds, which are rarer than colourless ones. Coloured diamonds come in many hues, but pink and blue are the most coveted. Blue diamonds are among the rarest and are found at levels four times deeper than most diamonds, according to the Gemological Institute of America.

The GIA (Gemological Institute of America) ranked the DeBeers Cullinan Blue perfect according to every criterion. Fancy Vivid Blue is the highest ranking for a colored diamond. No more than 1% of blue diamonds receive it. The gem is Internally Flawless. It was found to have an excellent polish and to be of Type IIb, a category which represents less than 0.5 % of all diamonds.

If you are wondering what makes a blue diamond blue, it’s a fabulous fluke of nature. Scientifically speaking, trace amounts of the rare element boron are within the diamond crystal lattice.

Another astonishing fact about the gem is that it was recently discovered. In 2021, it was unearthed at the Cullinan Mine in South Africa, one of the very few sources in the world for extremely rare blue diamonds.

With inputs from Bloomberg.

More in this category: « Treasury's Bounce Back support scheme for businesses comes into effect. State capture and lack of political will has stalled progress in transformation. »
back to top