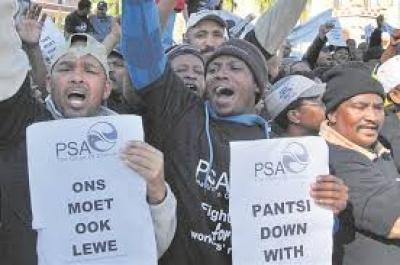 The unions are also pushing for a single-year pay deal because they no longer trust the government to honour longer-term accords, according to a presentation they made to the public sector bargaining council on Wednesday That comes after the government reneged on increases agreed to in 2020, the final year of a three-year deal, on the grounds that it was unaffordable.

The remuneration of civil servants accounts for almost a third of total government expenditure and bowing to demands for inflation-beating increases would derail the National Treasury’s plans to rein in the budget deficit and bring runaway state debt under control. Credit-rating companies have repeatedly cited South Africa’s high wage bill as a major risk to state finances. The annual consumer inflation rate is currently 5.9%.

When the government backtracked on the 2018 accord, it argued that the Department of Public Service and Administration didn't have a mandate from the Treasury to sign off on the terms – a view upheld by the nation’s top court. The unions now want written confirmation from the Treasury that it has delegated the necessary negotiating authority to the department.

The unions' other demands include:

The government is set to respond to the unions' demands on 19 May. The February budget estimated that the state's annual salary bill will rise by an average of 1.8% annually over the next three fiscal years.

At the Public Service Co-ordinating Bargaining Council (PSCBC), the unions have also proposed big changes in how their remuneration is negotiated. The unions are now negotiating wage adjustments for a single year (2022). This is a departure from past practices, as trade unions and the government preferred to conclude a multi-year wage agreement, covering at least three years. Multiyear wage agreements allow the government to plan for finding money to fund wage increases for public servants.

The unions also want a "written commitment" from the Treasury, mandating the Department of Public Service and Administration to enter into wage negotiations. This would have the effect of binding Treasury and the department on whatever is agreed to with unions.

The bargaining position of the unions in wage negotiations was weakened after they lost their case at the Constitutional Court in February that sought to force the government to implement wage increases of about 8% in 2020, under the last leg of a three-year wage agreement.

More in this category: « Ratings agency Moody's expects SA's inflation to hit 8% in 2022. Rand Merchant Bank appoints Emrie Brown as the new CEO. »
back to top