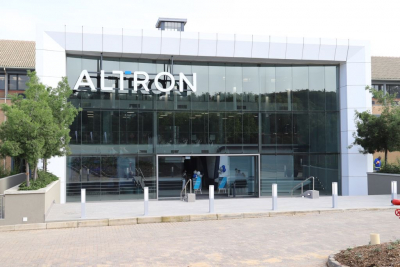 JSE-listed technology company Altron has announced its financial results for the year to February 2022, during which both revenue and operating income gained. Revenue grew 5.7% to R7.9 billion while operating income grew in the double digits at 34.2% to R498 million compared to the previous year, following several key wins during the year.

Outgoing Group Chief Executive Mteto Nyati, presiding over his final set of results, said the company delivered a solid performance, even though the 2022 financial year was tough due to the sustained COVID-19 pandemic, a global shortage of electronic components and significant cutback on capex by large enterprise customers.

"This performance was possible due to the resilience of our Own Platform segment characterised by high annuity revenue, the turnaround of Altron Karabina and Altron Managed Solutions, exceptional performance of Altron Arrow, and a strong focus on cost reduction at the centre," Nyati said.

Own Platform reported revenue growth of 6.2%, up to R2.9 billion, while operating income of R546 million exceeded the prior year by 16.9%. This is off the back of gains from Netstar, Altron FinTech, and Altron HealthTech.

Netstar's revenue of R1.7 billion was a 7.8% increase from the prior year. Supported by a strong performance in Australia, the South African business continues to stabilise operational issues that have placed pressure on its subscriber churn rates during the period. As a result, Netstar South Africa has seen consistent net subscriber growth since June 2021.

Altron FinTech’s revenue of R854 million exceeded the prior year by 4.5% while operating income of R193 million increased on the prior year by 43%. This profitability has been aided by adding two new insurance products, funeral cover and credit life, and short-term bridging financing for our customers in the microfinancing space.

Altron HealthTech grew revenue by 2.9% to R323 million year-on-year. With the investment into its new platform, Altron HealthTech will be able to capture the next generation of medical practitioners, which has been a challenge due to the current ageing technology and offerings.

"Our company is making good progress in setting up Altron 2.0 by disposing capital heavy and loss-making businesses and acquiring assets in high growth segments of the market," said Nyati. As a result, Altron 2.0 targets, among other metrics, high annuity revenue and a net debt to EBITDA ratio of less than one.

It seeks to achieve these outcomes through Altron being capital-light, owning its Intellectual property and providing differentiated offerings in cloud, security, data, and software application development.

Other achievements as it moves towards successfully implementing Altron 2.0 include turning around Altron Karabina and Altron Managed Solutions, Altron Arrow becoming a half-a-billion-rand business, Altron Nexus collecting over R900 million in debt – mainly from the public sector amid the COVID-19 pandemic – and head office costs being reduced by R98 million.

For the next year, Altron anticipates continued pressure on supply chain and pricing due to the global component shortage. However, the resilience of the Own Platform segment should carry through into the first half of the 2023 year, while Altron FinTech anticipates a strong performance to the start of the new financial year.

Within the Digital Transformation segment, a strong focus will be placed on the turnaround of Altron Systems Integration to improve its performance. The segment will be strengthened by Altron Security's performance with the addition of LAWtrust. Altron Karabina is expected to continue its strong growth trajectory against the first half of 2022. At the same time, Altron is in advanced discussions with a potential buyer to acquire Altron Managed Solutions' banking business as it moves towards its strategic objective of being a capital-light organisation.

More in this category: « SARS to identify new opportunities and increase revenue collection. Economists predict big rate hike with an announcement expected on Thursday. »
back to top