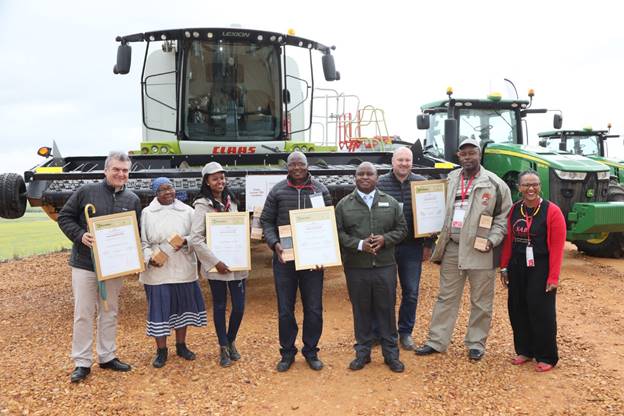 SAB has opened an R80 million agricultural Research and Development facility in Caledon in the Western Cape, which will pilot new farming techniques, technology and crop varieties to accelerate agricultural development in South Africa. The facility will have a critical focus on black emerging farmers.

The facility was officially launched in conjunction with the National Department of Agriculture, today.

It is one of the largest privately funded Research and Development facilities in South Africa and all research output will be made freely available on a dedicated website, along with weather data, to ensure the benefits are spread as widely as possible to all farmers.

Deputy Minister of Agriculture, Mcebisi Skwatsha, noted that Agriculture and Agro processing industries play an important role in making a contribution towards economic growth, poverty alleviation and job creation. SAB’s efforts is an important part of this.

With micro-breweries, a malting plant and laboratory on site to test and enhance new varieties of barley for making beer, the centre will open new opportunities for farmers to improve yield and profitability, and for brewers to enhance flavour in their beverages.

The space is designed for collaboration in order to co-create innovative solutions with partners, including the Agricultural Research Council.

The centre will also test new farming techniques and varieties of all cereal crops grown in the region – including oats, barley, canola and wheat – to develop new standards in agricultural best practice and improve food security.

Josh Hammann, SAB Director of Agricultural Development, explained that the R&D facility would test new practices, including the impact of eliminating the use of pesticides in one field and comparing the results with another field sprayed with pesticides, which would be too financially risky for a commercial farmer to try.

The centre will also conduct trials for input efficiency, irrigation, management, growth regulators and crop protectants to build a knowledge base for new and existing emerging and commercial farmers.

The R&D facility is part of a R610-million 5-year investment in Agriculture, which is part of the R1-billion public interest commitments SAB made to the South African government at the time of its 2016 merger with AB InBev.

It is expected that SAB will exceed its initial target and commitment to reach 800 farmers in total by 2021 with the figure already close to 700 currently reached. By the end of last year, the emerging farmers programme was ahead of schedule, with 684 farmers reached - 44% of them women and 15% youth.

In addition, SAB has set itself a target to fully localise barley production by achieving a harvest of 425 000 tonnes by 2021, and to become a net exporter of hops. 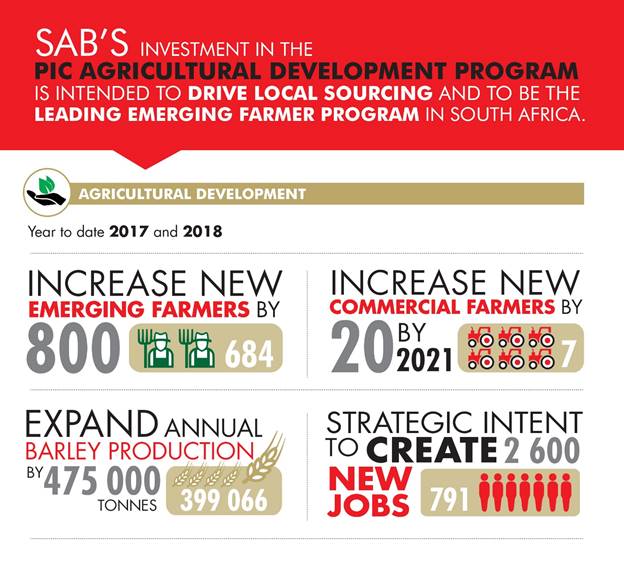 Through agricultural support services company FarmSol, which was set up by SAB specifically for the task, SAB supports emerging farmers with zero-interest bearing loans and helps with procurement, mechanisation, advice and hedging of crops, while also entering into guaranteed offtake agreements which ensure a reliable income and sustainability of the farm.

“This closing of the loop – from financial assistance to purchasing the crops – as well as free support services, sets the SAB emerging farmers programme apart,” said Hammann.

SAB also co-operates closely with the Agricultural Research Council, and is currently working on an early warning system to detect outbreaks of Fall Army Worm, a pest that invaded the country three years ago and affects all crops.

“Despite the drop-in commodity prices and difficult conditions last year, the majority of emerging farmers in our programme are already profitable, and our Farmer of the Year award went to a black woman farmer for the first time,” said Hamman.

By processing all its maize and barley requirements in South Africa, SAB also supports the government’s drive to increase agri-processing in the country, along with its commitments to agricultural development.

Tweet
More in this category: « SAA, SA Express and Mango to be merged Retail sector shake-up as global sourcing e-commerce website launches. »
back to top