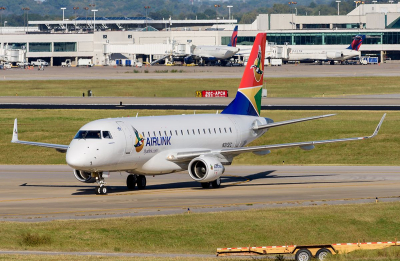 The privately-owned airline previously known as SA Airlink has officially changed its name to Airlink.

This is part of its strategy to distinguish itself as a totally independent airline, the company said in a statement.

Airlink was in a partnership with SAA for more than 20 years, an arrangement that allowed SAA to sell tickets and fly passengers on Airlink flights.

But earlier this year,Airlink terminated its franchis agreement after SAA went into business rescue and failed to pay over more than R700 million of revenue for tickets issued on flights flown by Airlink.

Given that Airlink has new Johannesburg-Cape Town and Johannesburg-Durban flights, this means passengers can book a single ticket for a long-haul flight across the world. Airlink also flies to more than 20 regional destinations in Southern Africa, include Gaborone, Maun, Tete, Port Elizabeth, Lusaka, Harare and Victoria Falls.

Airlink flights are now sold on www.flyairlink.com and no longer via SAA’s website.

"The subtle, but significant, name change is a key element of our re-positioning, recovery and growth strategy,"said Airlink CEO and Managing Director, Rodger Foster.

"It should be seen together with recent commercial developments, including the interline agreements, the launch of our own mainline South African domestic services and new regional routes linking Johannesburg with Maputo and Windhoek." Airlink plans to announce additional new and reinstated routes in the coming weeks and months.

New branding will also be released soon, the company said.

Twitter
More in this category: « Why sound money management can strengthen your marriage. MTN awards NPOs R1m for programme monitoring. »
back to top