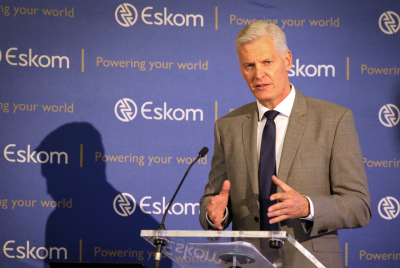 Eskom announced that it made a net loss of R20.5-billion in its financial year ending in March 2020, down slightly from R20.9-billion the previous year,with Chief Executive Andre De Ruyter describing the results as disappointing amid capacity constraints and rising debt.

The power utility said it expected to make a larger loss of R26.2-billion in the current financial year ending in March 2021.

The expected deterioration is primarily because of the impact of the Covid-19 pandemic on electricity sales, it said in a presentation.

Eskom’s debt rose to about R484-billion from roughly R441-billion a year earlier. The new debt figure is equivalent to more than 9% of South Africa’s GDP.

The power utility debt, which is largely guaranteed by government, poses a threat to the fiscus. According to the latest medium-term budget, financial support for Eskom is reduced by R4.2 billion over the medium term, but will likely amount to R225.8 billion from 2019/20 until 2025/26.

The company warned that 2021 financial results were expected to be worse than the 2020 period, due to the anticipated impact of Covid-19 on operations, particularly on sales. During the hard lockdown which came into effect from for towards the end of its 2020 financial years.

Eskom, during the period, saw a drastic dip in electricity demand, as large electricity users such as mines and other industries were ordered to shut or reduce capacity.

Eskom executives painted a bleak financial picture for the firm, which is currently implementing its turnaround strategy, as it seeks to stabilise its finances and roll out the crucial maintenance programme on its coal power stations, including the crippling costs associated with the fixing of design flaws on the Medupi and Kusile units.

The amount of cash that Eskom is currently generating from its operations is not sufficient to cover its debt service.

Eskom said it was working with National Treasury and the Department of Public Enterprises to find a solution on debt reduction but would at some point look into appointing advisers.

Twitter
More in this category: « MTN awards NPOs R1m for programme monitoring. Comair closer to take off as it reaches two major milestones in the business rescue process. »
back to top