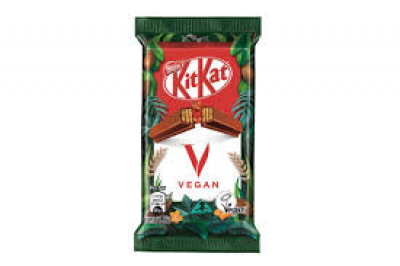 Nestle SA is adding its first vegan milk chocolate to its products as the world’s biggest food company expands beyond meat alternatives.

The product will be for sale online and at selected stores in a handful of markets including the UK as a test run before a possible wider rollout.

The bar, which uses a rice-based formula as a milk substitute, took about two years to develop. The main challenge in making alternatives to milk chocolate is ensuring it blends well with cocoa and sugar for a creamy texture.

The new vegan KitKat – called KitKat V – will be launched later in the year in several countries across the globe. It will only be available through the KitKat Chocolatory and selected retailers, to test the opportunity for a wider roll-out.

Other substitutes, such as soy or almond formulas, can create off-notes, von Maillot said.

While there are quite a few small labels that make vegan milk chocolate, most of the popular brands haven’t yet joined in on the trend.

Demand for plant-based food is growing everywhere,” von Maillot said in a phone interview. "KitKat was a logical choice, as it’s by far the biggest brand and a global brand."

Confectionery is one of Nestle’s last categories to join the plant-based trend. Nestle Purina last year introduced a blended pet food line, adding insects and plant protein from fava beans and millet to the meat protein.

Twitter
More in this category: « SAA to get partner as it prepares to exit business rescue. Top 5 Tips for Renting A Container in 2021. »
back to top