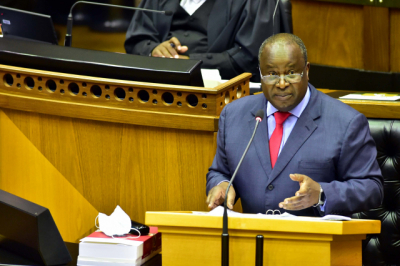 Finance Minister Tito Mboweni has forecast growth of 3.3% this year on hopes that a well-managed vaccination program, to fight the COVID-19 pandemic, will help lift the economy.

It should be said of course that this positive sounding figure comes on the back of last year's GDP drop of over 7%.

"There is a sense, listening to the Minister, that the pandemic will start to come under control with government's plans to vaccinate the population. With these vaccines coming onto the scene, there's increased hope of things getting back to normal and business as usual returning," says Liberty Divisional Executive for Investments, Vimal Chagan.

"Of course, it goes without saying that the improved economic outlook is contingent on us not getting any more curve balls thrown at us this year. The outlook of 3.3% growth sounds encouraging but remember the level of output is still below 2019 levels right now. And of course, the unemployment rate remains very high, which will subdue consumer spending in the broader economy.

"Critical to a real long-term recovery is debt stabilisation, which is forecast to stabilise at 88% of GDP in 2025/6. SARS will need improved tax collection to maintain this level and as the Minister mentioned, R3 billion will be invested to improve collection technology infrastructure and artificial intelligence capabilities," he says.

On the plus side, Chagan says Mboweni's talk around increasing infrastructure spend sounds good, but his comments about the user paying suggests we might see more tollgates popping up to make this happen.

He adds that these infrastructure plans must be realistic, especially if there is an expectation that the private sector, including retirement funds, will be partnering on this. "These must be investable projects. There must be a good investment profile for broader business involvement and investment," he says.

"I was encouraged that despite the difficult position of our country's finances, that the Minister has found room to give some relief to taxpayers."

Chagan says the reduction in the corporate tax rate by 1% was good news, although it comes with some qualifications.

"In reality there is some fine print to this. The government also wants to limit deductions and some other things, so any gains will be offset to some degree."

"I was heartened by talk of government getting more people into pension funds and savings. This has been spoken about for a long time and involves mostly people in the lower economic brackets where a culture of formal saving is less common. A culture of long-term saving or investing, especially for retirement can go a long way in making more people less reliant on state assistance," he says.

"There were some other things I would like to have seen in this budget. For example, besides mentioning infrastructure spend, the Minister didn't mention any firm plans as to how government is going to get the economy to strengthen up again. Perhaps giving some thought to SME's, the powerhouses of the economy, could be a step."

"Some real creativity will be needed to get South Africa's growth potential up to speed and our debt levels down. There were some signs of this in the budget. One should hope government will continue to pursue the ideas and more importantly, implement them," Chagan says.

More in this category: « Kulula to resume flights at Lanseria from April. Add Mboweni's windfall from tax relief to your savings and budget better. »
back to top