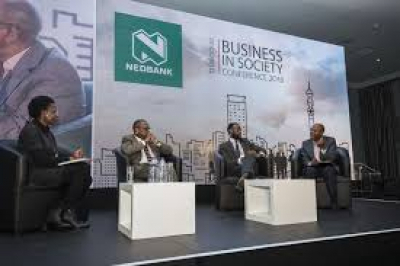 Financial services group Nedbank said Wednesday (17 March) that it delivered an improved financial performance in the second half of 2020.

Headline earnings for the year were affected by higher impairments and lower revenues, it said – the latter mainly due to lower levels of client activity and the impact of lower interest rates on endowment income.

Revenue of R46.53 billion, was down 3.6%, while the group has decided not to declare a final dividend for 2020. Based on current forecasts, the group expects to resume dividend payments when reporting interim results in 2021.

At the peak of the Covid pandemic, Nedbank supported clients with cashflow relief on more than R120 billion of loans.

"We are pleased that by the end of the year our clients have been able to reduce this level of support to R28 billion (with only R2 billion remaining for retail clients) as economic conditions improved," said chief executive Mike Brown.

For retail and business banking, gross loans and advances increased by 3.3% yoy to R375 billion. After a negative impact as a result of the closure of the deeds office and motor dealerships in April 2020, payouts increased in H2 2020 as clients who were in good financial standing took advantage of the 300 bps decline in interest rates, Nedbank said.

Business banking advances declined by 2.7% as new-loan payouts remained muted, given the lower business activity levels, and were not sufficient to replace the book rundown. MFC (vehicle finance) loans increased by 4.6% due to a combination of increases in average payout per deal, as well as a slowdown in rundown.

Unsecured lending grew by 10.3% as a result of product and process enhancements, mostly through digital and call centre channels, driving increased take-up rates of approved loans, the bank said. Card advances decreased by 2%, challenged by the impact of Covid-19 and clients’ reduced ability to spend during the period.

Residential mortgage loans grew by 4.8%, slightly ahead of the industry.

Looking ahead, Nedbank said that forecasting remains difficult in a volatile health and economic environment, and risks of further waves and variants of Covid-19 remain high. But off the lower 2020 base, the group currently expects the country’s GDP to increase by 3.4% in 2021.

Given the economic forecasts from the Nedbank Group Economic Unit – the strategic drivers, and particularly the expectation of an ongoing improvement in the credit loss ratio – Nedbank’s current guidance on financial performance for the half-year to June 2021 is to grow headline earnings per share and earnings per share by more than 20%.

"It is essential that government follows the path to deficit reduction set out in the national budget to avoid any further sovereign risk rating downgrades and the resultant negative feedback loops.

"Ultimately, the pace of the domestic economic recovery will depend on how quickly SA can achieve population immunity as the phased Covid-19 vaccine rollout races against new and more contagious variants of the virus. Simply put, in 2021 vaccination is the best economic policy.

"The outlook for the SA economy is nevertheless more promising, with the recovery supported by firmer consumer spending, the rebuilding of domestic inventories and stronger commodity prices and export growth, particularly during the second half of the year," Brown said.

In a trading statement for the six months ending June 2021, Nedbank said that it expects HEPS and basic EPS to increase by more than 20% (HEPS greater than 525,6 cents and basic EPS greater than 324 cents) when compared with those in the six-month period ended June 2020 (HEPS: 438cents, basic EPS: 270 cents).

Twitter
More in this category: « Shoprite CEO wants to procure Covid-19 vaccine for employees. Patrice Motsepe’s ARC bulks up investment in TymeBank. »
back to top