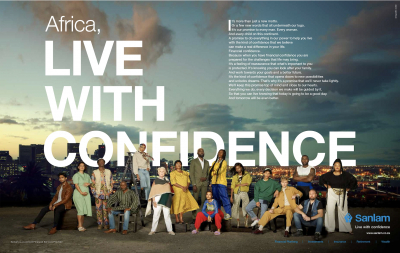 Sanlam announced today that it would reboot its business to become a purpose-led organisation and brand, focused on giving millions of Africans the chance to live with financial confidence. In the next two to three years, the continent's largest non-banking financial services group plans to catalyse this purpose through an expanded product offering, data and digital transformation, empowerment, building a future-fit culture, innovation and partnerships.

Paul Hanratty, CEO of Sanlam, says, "The pandemic has placed such a harrowing spotlight on how vulnerable the impoverished are both in our country and across the continent. Everyone deserves an equal chance at living a better life, at inclusion in the mainstream economy. At the intersection of financial inclusion and financial security, you find financial confidence. That is where we will continue to build capacity, across Africa and beyond."

According to the International Monetary Fund (IMF), financial inclusion is synonymous with increased economic growth, reduced income inequality and accelerated GDP growth. However, globally, more than 1.6 million adults remain unbanked. The World Bank's Global Financial inclusion report found the financial systems of many African countries remain underdeveloped compared to other developing economies, despite focused reforms in the last two decades. Progress is often halted due to the digital divide, social and political instability, unemployment, and unequal opportunities for women.

Hanratty says true inclusion goes beyond access to banks and credit. "It's about ensuring the previously marginalised have access to well-functioning financial infrastructure. It also means equipping individuals with the financial confidence to manage their money. The IMF ranks Africa's growth prospects between 2018 and 2023 as one of the highest in the world. The continent is also home to the world's fastest growing middle class. The potential is immense, but only if it can be unlocked.

"And by imprinting 'Live with confidence' in the DNA of every aspect of our business, from the financial adviser's meeting with a client to the development of new offerings, we will empower generations to be financially confident, secure and prosperous."

Sydney Mbhele, the Chief Executive: Brand at Sanlam, says the new pay off-line 'live with confidence' will be brought to life through a range of initiatives, including new data- and AI-led innovations such as a Confidence Coach Chat-bot to upskill financial literacy, an Annual Financial Confidence Index to pinpoint regions where capacity building is imperative, and the launch of a financial literacy TV game show, Sanlam Moola-Money in April.

"No society can surely be flourishing and happy, of which the far greater part of the members are poor and miserable." Adam Smith, The Wealth of Nations, 1776

Mbhele adds that the rebranding goes beyond 'beautiful words', "It's an enabler for the business. Sanlam has always had this notion of empowerment at its heart – from its founding mission in 1918 to empower poor Afrikaners to pioneering South Africa's first BEE transaction in 1993. We are going back to our roots of empowerment and articulating this in a more purposeful way."

Mbhele says that to live with confidence is a feeling of empowerment that comes from knowing you're in control of your life, "Financial confidence gives you a better chance of reaching the goals that matter to you. It's accessible to everyone, whether you have a lot or a little, irrespective of age and stage. It is a mindset of abundance rather than scarcity. We believe the way you feel about your finances drives how you act. And those actions can have a profound impact on how securely and prosperously you live your life."

The Sanlam Group has long been committed to investing in Africa's potential. As the continent's largest non-banking financial services provider in 33 African countries and counting, it has invested R630 million in the communities it operates in, in the last 10 years alone, through its Sanlam Foundation.  It also contributed over R5 billion to relief and rejuvenation efforts to revive African economies during the Covid-19 crisis.

Twitter
More in this category: « AA warns of a record high petrol price hike in April. ICASA announce the new BEE rules in the IT sector. »
back to top