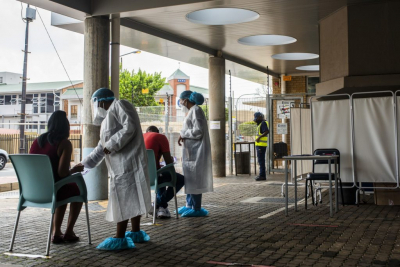 The National Institute for Communicable Diseases (NICD), reports 14,858 new COVID-19 cases that have been identified in South Africa, which brings the total number of laboratory-confirmed cases to 2,342,330. This increase represents a 26.5% positivity rate.

NICD said a further 433 COVID-19 related deaths have been reported, bringing total fatalities to 68,625 to date.

Meanwhile the Department of Health has updated its Covid-19 vaccination targets for South Africa and now aims to have 35 million people jabbed by Christmas.

We will be able to have vaccinated, at least one dose, 35 million people before Christmas," the department’s Dr Nicholas Crisp told parliament on Wednesday (21 July). "That is the target that we have set and that we are chasing," he said.

Crisp said the country lost around 25,000 vaccine doses during looting and acts of arson last week. While this will not put a dent in the country’s vaccine plans, he said that every lost vaccine is a lost opportunity".

Crisp said that health experts also predict a "second hump" in the ongoing third wave of infections because of the riots.

We don’t know how big it will be, but it should be probably within seven to 10 days after people were milling around together and transmitting the virus".

The government has set a number of vaccination targets, which have, to date, been missed due to a host of problems.

The health department’s initial plan was to roll out vaccines in three phases, first targetting healthcare workers, then essential workers and those at highest risk (over the age of 60). The final phase would open vaccines up to the general population.

Phase 1 was disrupted by a recall and freeze in administering the Johnson & Johanson vaccines in South Africa and in other countries. The doses were ultimately not used, with the delay setting the rollout back several weeks.

During phase 2, vaccine registration was opened to those over 50 years of age sooner than expected, due to the low turnout of those aged over 60. By 1 August, vaccines will start rolling out to those over the age of 35 – also ahead of schedule.

To date, only 5.8 million people in South Africa have been vaccinated, with only 85 days left to hit the phase 1 and phase 2 target of 17.8 million total vaccinated by mid-October.