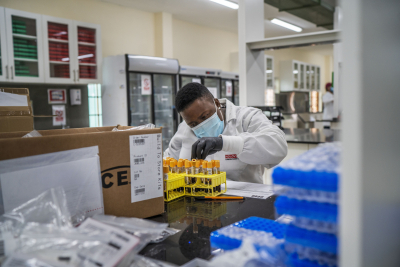 The National Institute for Communicable Diseases (NICD),reports 5,931 new COVID-19 cases that have been identified in South Africa, which brings the total number of laboratory-confirmed cases to 2,819,945. This increase represents a 14.5% positivity rate.

NICD said  a further 76 COVID-19 related deaths have been reported, bringing total fatalities to 83,419 to date.

Meanwhile Health Minister Joe Phaahla said on Friday that scientists had told the government that at this stage the C.1.2 coronavirus variant detected locally was not a threat.

The C.1.2 variant was first identified in May and has now been seen in all of the country's nine provinces.

It contains some mutations associated in other variants with increased transmissibility and reduced sensitivity to neutralising antibodies, leading researchers to flag its detection to the government and the World Health Organization (WHO).

"At this stage they (scientists) have assured us it's not really a threat, they are just watching it," Phaahla told a news conference, noting C.1.2 had only been detected in small numbers so far.

He added that it was almost certain that the country would face a fourth wave of COVID-19 infections around the end of the year.

The WHO this week designated the C.1.2 variant as one for further monitoring, a category that reflects that it may pose a future risk but that the evidence is currently unclear. It has not been designated as a "variant of interest" or "variant of concern," categories considered more serious and notated by letters of the Greek alphabet.

South African researchers are currently running laboratory tests on how C.1.2 responds to antibodies generated by vaccines or prior infection, but it could be weeks before those results are out.

Genomic sequencing data from South Africa this week showed that C.1.2 accounted for 2.4% of genomes sequenced in August, versus 2.5% in July and 1.2% in June. The Delta variant accounted for roughly 95% of sequences in August.

Delta is the fastest spreading variant the world has encountered so far, and it is upending assumptions about COVID-19 even as nations loosen restrictions and reopen their economies.

South Africa was the first country to detect the Beta variant, one of only four currently labelled a variant of concern by the WHO. Beta is believed to spread more easily than the original version of the coronavirus that causes COVID-19, and there is evidence vaccines work less well against it, leading some countries to restrict travel to and from South Africa.