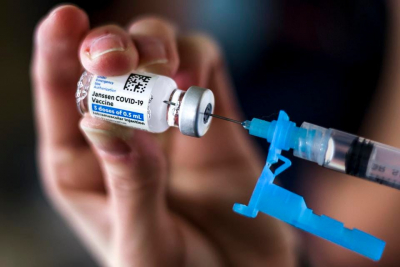 Johnson & Johnson’s Covid-19 vaccine cuts the risk of getting infected with the disease by about half, according to the latest results of a trial involving almost half a million health workers in South Africa.

The vast majority of the breakthrough infections were mild, Glenda Gray, co-leader of the study known as Sisonke, said in an interview, citing unpublished data from the trial, which had earlier shown the shot’s effectiveness against severe illness.

Like all Covid vaccines, J&J’s was intended and tested for its ability to prevent Covid hospitalizations and deaths. Even so, the frequency of breakthrough infections in vaccinated people highlights the challenge governments face in halting the virus’s spread, which threatens to lead to the proliferation of new variants that may be even more contagious.

Coupled with vaccine hesitancy, the limited efficacy of shots in stopping mild infections will mean "we will continue to see a flow of infections," said Bruce Mellado, a professor at the University of the Witwatersrand in Johannesburg who uses modeling to predict the trajectory of infections. Still, he said, the effectiveness against death and severe disease could prevent a "human catastrophe."

J&J didn’t immediately respond to a request for comment.

The study included several weeks during which South Africa was going through a third wave of coronavirus infections, spurred by the highly contagious delta variant. The emergence of new, fast-spreading strains has made earlier goals of herd immunity – when the proportion of the population that’s vulnerable to the virus sinks so low that it stifles spread – harder to reach.

By cutting the number and the intensity of infections, the vaccines limit the chance of further mutated strains emerging. Yet for many countries, the focus has shifted to reducing the seriousness of illness and subsequent demand for more intensive treatments.

The Sisonke trial measured breakthrough infections both by asking participants to report a positive result as well as by getting daily alerts from testing laboratories. The researchers also tapped data systems to see who had been hospitalized or died.

The final results which include three sets of data from private insurers and the government, will be submitted for publication in days, said Gray, who’s a research professor at the University of the Witwatersrand.

The J&J vaccine, a key element in South Africa’s vaccination plan, has also been given to teachers, police, and other government employees. It’s expected to play an important role in reaching remote areas, as it can be stored at refrigerator temperature.

The Sisonke trial was put in place in February after the South African government’s plans to use AstraZeneca Plc’s shot showed limited efficacy against mild cases, disrupting government plans for a wide government rollout. Gray and other scientists concluded an agreement with J&J to run a mass trial.

Other vaccines in wide use have indicated vulnerability to breakthrough infections. A study released Aug. 9 showed that Moderna Inc.’s was associated with a two-fold reduction of breakthrough risk compared with the shot from Pfizer Inc and BioNTech SE. The results were reported ahead of peer review.

The results against breakthrough infections are "not unique to Johnson & Johnson, but also for other vaccines," said Shabir Madhi, a vaccinologist from the University of the Witwatersrand who led trials of both AstraZeneca’s and Novavax Inc.’s shots in South Africa. "It comes as little surprise with ongoing evolution of the virus."

Meanwhile the current surge in COVID-19 infections seems to be showing signs of a sustained downward trend. Today the institute reports 7 338 new COVID-19 cases that have been identified in South Africa, which brings the total number of laboratory-confirmed cases to 2 836 773. This increase represents a 13.3% positivity rate.

"Although the total number of cases today is higher than yesterday (n= 5 372) and higher than the average number of new cases per day over the previous seven days, the number of new cases and positivity rate have decreased nationally compared to last week," says NICD Acting Executive Director Prof Adrian Puren. While there have been provincial disparities in the timing and extent of the third resurgence, he adds that all nine provinces are currently exhibiting a drop in daily new cases. "The provinces of Gauteng and Limpopo have already met the end-of-wave threshold criteria."

As per the National Department of Health, a further 253 COVID-19 related deaths have been reported, bringing total fatalities to 84 152 to date.