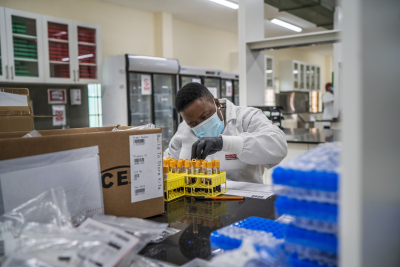 South Africa has recorded a total of 2.843,042 positive cases of cornavirus, with 6,270 new cases identified since the last report, the National Institute for Communicable Diseases (NICD) has announced.

This increase represents a 12.0% positivity rate.

According to the institute, the current surge in Covid-19 infections seems to be showing signs of a sustained downward trend.

The novel coronavirus has killed at least 4,593,164 people since the outbreak emerged in China in December 2019, according to a tally from official sources compiled by AFP at 1000 GMT on Thursday.

At least 222,467,600 cases of coronavirus have been registered. The vast majority have recovered, though some have continued to experience symptoms weeks or even months later.

Meanwhile South Africa’s government is preparing to ease restrictions that were imposed to curb the spread of the coronavirus after a sustained slowdown in new infections.

Larger public gatherings are likely to be permitted, making it easier for political parties to campaign for upcoming municipal elections, according to two people with knowledge of the deliberations within government, who asked not to be identified because the information isn’t public.

Alcohol trading hours are set to be extended and a nighttime curfew will probably be shortened, they said.

The National Coronavirus Command Council met on Tuesday to assess the rules. President Cyril Ramaphosa will discuss planned changes with officials from religious groups, political parties and civil rights groups ahead of an address to the nation in the coming days, when he’s expected to move the country to virus alert level two, from level three, the people said.

"Government has already issued a statement that conditions around the current restrictions are being examined," acting spokesman for the presidency Tyrone Seale said by phone from Pretoria. "I have nothing to add to that."

The imposition of stop-start curbs since the pandemic hit in March last year has shuttered thousands of businesses and added to already rampant unemployment. The economy shrank 6.4% last year, the most since at least 1994, when white-minority rule ended.

Alcohol sales are currently only permitted at retail outlets from 10h00 to 18h00 from Monday to Thursday, and at restaurants and bars up to 20h00. Gatherings are limited to 50 people indoors and 100 outdoors, while a curfew is in place from 22h00 to 04h00.

An easing of the restrictions would come in the wake of the Constitutional Court’s rejection of an application by electoral authorities to delay a local government vote until next year. Political parties have less than two months campaign before the 1 November plebiscite.

More in this category: « J&J vaccine reduces COVID infections by half among health workers,according to a new study. Covid-19 Daily Update:SA records 5,885 new cases with 281 related deaths. »
back to top