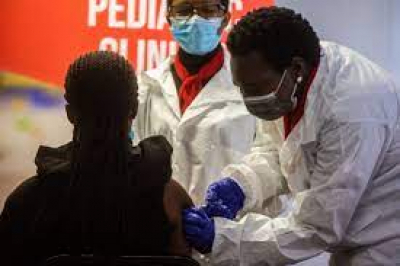 The National Institute for Communicable Diseases (NICD),reports 475 new COVID-19 cases that have been identified in South Africa, which brings the total number of laboratory-confirmed cases to 2,921,589. This increase represents a 1.7% positivity rate.

NICD said a further 47 COVID-19 related deaths have been reported, bringing total fatalities to 89,151 to date.

To encourage more South Africans to get the COVID-19 vaccine, various companies and foundations have come on board to help boost vaccination rates by providing various incentives.

Health Minister, Dr Joe Phaahla, said adults over the age of 60, who take the vaccine in November, will be rewarded with a R100 grocery voucher after taking their jab.

The Minister on Friday announced that the pilot scheme was valued at R26 million to benefit 260 000 pensioners.

"This will be on a first-come, first-serve basis,"he said.

The Minister explained that the voucher will be texted to the cellphone number senior citizens registered with on the Electronic Vaccination Data System (EVDS). Coupons will be redeemable at Shoprite, Checkers and Usave stores.

Pensioners will automatically get an invitation to receive their vouchers. However, due to the Protection of Personal Information Act or POPI Act, they will have to opt-in, by dialling "YES" at no cost to the user upon receiving an SMS.

"By dialling in, they'll then be given access to the Money Market account of Shoprite, which protects their money. They cannot lose their voucher and once they've registered, that money is available to them."

"We hope the pilot will be a success so that it can encourage other companies to come forward. We welcome other initiatives which are still being considered.”

Meanwhile, Nando's has offered 1 000 vouchers valued at R500 each which will be awarded to members of 15 best performing teams at vaccination sites on Election Day, 1 November.

In addition, Uber has also offered free rides up to R100 each for health workers who will be on duty on the same day.

The Minister remains confident that government would have reached 40% coverage of all adults with the vaccination by mid-November.

"We're also happy that we see much steadier and consistent return for the second dose of Pfizer. So, this is not a major worry, as much as it was pointed out previously since a lot more people are returning."

In addition, the Minister said the country is getting closer to the 70% of coverage of the adult population. He said he was hopeful about reaching 70% of the over 60-age group and the 50 to 59 years cohort by the end of December.

"We again urge everyone to take advantage of the current low levels of infection to come forward to receive the vaccination before the expected fourth wave hit our shores."

According to the Minister, the vaccination of 12 to 17-year-olds is proceeding steadily, with 99 900 having already vaccinated by Thursday and 183 700 teenagers registered.

"We expect the numbers to pick up during the school holidays,"he said.

This means that South Africa has now administered over 22 million vaccine doses with 15 078 053 individuals with at least one jab which is 37.9% of the adult population.

On the vaccination certificates, the Minister said over 2.8 million had been downloaded so far.

"I wish to again urge all South Africans to heed the call to protect themselves, their families, friends, neighbours and co-workers now by taking the vaccine, the nation’s future is in your hands."

He also called on citizens to keep safe ahead of the local elections. Let’s vaccinate before, on Election Day and after it, said the Minister.