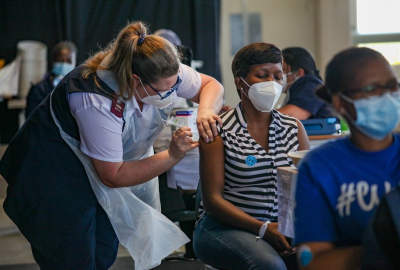 The National Institute for Communicable Diseases (NICD),reports 344 new COVID-19 cases that have been identified in South Africa, which brings the total number of laboratory-confirmed cases to 2 922 735. This increase represents a 1.3% positivity rate.

NICD said a further 23 COVID-19 related deaths have been reported, bringing total fatalities to 89 220 to date.

Meanwhile the Department of Public Service and Administration (DPSA) is considering a number of options to increase Covid-19 vaccination uptake in South Africa  – including mandatory vaccinations for government workers.

In a circular sent to department heads and director generals this week, cited the Occupational Health and Safety (OHS) directive published in June 2021 which will allow businesses to introduce mandatory vaccinations in South Africa, subject to certain requirements.

Following this, the department said that it was holding discussions around the following:

The National Education, Health and Allied Workers’ Union (Nehawu) has already slammed the circular and indicated that it will not support mandatory vaccinations for government workers.

The Cosatu-affiliated union said that vaccines have contributed greatly in protecting people from severe illnesses, hospitalisations and deaths. However, it said that forced vaccinations were not the answer.

"The national union is shocked and utterly disgusted by the circular issued by DPSA on mandatory vaccination of public servants. We must perhaps remind DPSA in case they have amnesia that South Africa is a constitutional democracy and the Constitution is the supreme law of the land which cannot be violated by anyone even the President of the Republic."

"There are established bargaining councils where conditions of service in the public service are deliberated on and agreed to. It is very unfortunate that DPSA saw it necessary to mislead employees against the commitment of President Cyril Ramaphosa who on record had assured the country that no one shall be forced to take the vaccine."

The union added that the DPSA had not properly consulted it on the proposed change.

"Indeed, the union supports the government efforts to have all employees vaccinated but not at the expense of their constitutional right and cannot be forced. As Nehawu, we have long called on the government to take the vaccine to the people to ensure that more and more South Africans are vaccinated.

"Whilst we support the vaccination programme, our view is that it should not be forced down the throats of public servants. Workers have rights and must be consulted on any matter that concerns their conditions of service and it cannot be correct for the employer to unilaterally change these conditions."