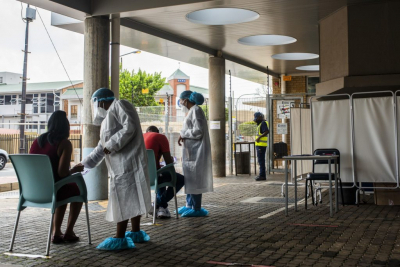 South Africa has recorded a total of 89,319 Covid-19 related deaths, with 24 new deaths reported in the past 24 hours.

NICD reports 358 new Covid-19 cases have been identified in South Africa, which brings the total number of laboratory-confirmed cases to 2 923 751.

This increase represents a 1.2% positivity rate, the National Institute for Communicable Diseases (NICD),announced.

18 699 684 tests have been conducted in both the public and private sectors.

Meanwhile Health Minister, Dr Joe Phaahla, has once again urged people to take the COVID-19 vaccine ahead of the imminent fourth wave that could hit the country soon.

"We are not oblivious to the fact that we are not yet out of trouble. The virus is still in our midst and every day we record a number of infections, it is only that it is at the low level of transmission at this stage,"the Minister said on Friday.

He described the life-saving vaccines as the only hope of long-term success in eradicating the Coronavirus.

"While we're on the elimination of HIV/AIDS and Tuberculosis, now we've got a new pandemic, the COVID-19. At least in this regard unlike HIV, we do have various vaccines and we ask people to come forward to take these vaccines."

He dedicated the Rotary Health Family Day to ensuring that his department provides focused attention to people living with various disabilities and they receive comprehensive health services, including also vaccination against COVID-19.

"This is indeed making sure that no one is left behind," he added.

He also paid tribute to President Cyril Ramaphosa who has been leading from the front and working around the clock to ensure that South Africans have access to the COVID-19 jabs.

However, the Minister believes that in the next few days, 40% of the country’s adult population would have received at least one dose of the jab if not fully vaccinated.

"Many of our colleagues in the SADC region are still struggling to access vaccines for their people. However, we are struggling to get the people to come to the vaccine. It’s embarrassing."

He said he hopes that government will be able to make the breakthrough and that more people will take the jab.

"We have all learned over the last 20 months that it is not over and that there is going to be another resurgence of the infection and therefore we must be ready and protect all our people."

He also expressed his gratitude to the Rotarians for their long history in the areas of vaccines.

"The polio vaccine played a very important role and even now we're very pleased with the announcement that the Rotary International is working with GAVI and COVAX to make sure that many disadvantaged countries can be able to access the COVID-19 vaccines as well."

He said the fight against COVID-19 is in everyone’s hands.

By the end of Friday, South Africa would have administered over 23 million doses of vaccines to just under 16 million citizens.

"So, there is still a long way to go from the 70% of the adult population to be covered. Because to reach 70%, we need to reach at least 27 million South Africans."

However, he believes that working with all their partners will help assist their drive to inoculation 40 million of the adult population by December.

"We know is a tall order. But we believe working together; we can be able to reach that."

In addition, the Minister recommitted that by the time the country reaches 2030, South Africa would have made inroads in eliminating HIV and AIDS.

"If not completely, but we'll be very close to achieving this in the same way as we also want to eliminate tuberculosis," he added.