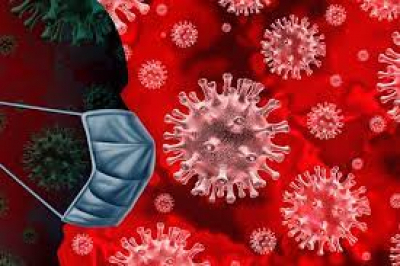 The National Institute for Communicable Diseases (NICD), reports 16,366 new COVID-19 cases that have been identified in South Africa, which brings the total number of laboratory-confirmed cases to 3,020,569. This increase represents a 23.8% positivity rate.

NICD said a further 21 COVID-19 related deaths have been reported, bringing total fatalities to 89,965 to date.

The fourth wave has sparked an increase in hospital admissions in children under the age of five, the NICD said.

In a briefing led by health minister, Dr Joe Phaahla, the NICD’s Dr Waasila Jassat said there has been a rise in children who are in hospital for Covid-19 in both the public and private sectors.

While most hospital admissions were initially recorded in Tshwane, Jassat said there are now starting to see an increase in other Gauteng districts as well.

"The week on week in cases and admissions is higher than we’ve seen it before,"she said.

While children may have not been "heavily" affected by the Covid-19 pandemic in the past with fewer admissions, recent data shows a different story during the current resurgence that is driven by the new Omicron variant.

According to Jassat, who leads the NICD’s hospital surveillance for Covid-19, during the third wave, there have been more admissions in young children under five and teenagers from 15 to 19.

"And now at the start of the fourth wave, we’ve seen quite a sharp increase across all age groups, but particularly in the under-five. The trend that we see now is different to what we saw before."

While the numbers may still be slightly lower in children, she said the hospital admissions for those under five are now second-highest and second only to the incidence in those over 60.

"Just anecdotally, a paediatrician in a Tshwane hospital shared with us that all the children that were admitted from 12 to 18 years old were not vaccinated even though they were eligible. And that the younger children less than 12 who are not eligible for vaccination, none of the parents except for three were vaccinated."

Most patients who landed in hospital during the first two weeks in the third wave were mostly elderly people between the ages of 50 and 60.

"However, in the fourth wave, you can see most admissions on younger people less than 40 years and particularly stark differences in the zero to four age group where there were fewer admissions in the third wave in the early part of the fourth wave."

In Tshwane, Jassat said there are already over 100 admissions in children under the age of four in the first two weeks of the current wave.

NICD head of the division of Public Health Surveillance and Response, Dr Michelle Groome, said that scientists are still waiting for additional data on the severity of the disease, while early evidence shows that this variant is more transmissible and that there is some degree of immune escape.

"There is a possibility of people who have already been infected being reinfected," she added.

However, she believes that vaccination will prevent severe disease in people who may be infected even after receiving the jab.