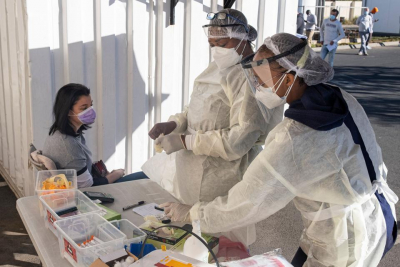 The National Institute for Communicable Diseases (NICD), reports 24,785 new COVID-19 cases that have been identified in South Africa, which brings the total number of laboratory-confirmed cases to 3,255,816. This increase represents a 30.9% positivity rate.

NICD said a further 36 COVID-19 related deaths have been reported, bringing total fatalities to 90,262 to date.

Health Minister Dr Joe Phaahla has called for responsible behaviour and stronger compliance with COVID-19 prevention and treatment protocols during the festive season.

"The NCCC has reflected on the current COVID-19 situation and deliberated on [a]  number of recommendations tabled by the Department of Health as part of safety measures to prevent a possible surge in COVID-19 infections associated with social gatherings which can be 'super spreader' events carrying a huge risk of transmission of the virus," said the department on Thursday.

The Council has directed the department to closely monitor the rising COVID-19 infections, hospitalisations, mortality and recovery rates, which are largely driven by the Omicron variant, which is contributing to the fourth wave in the country.

According to scientific studies, the virus is spreading quicker than in previous waves, but the rates of hospitalisations and deaths remain relatively low.

The Minister said said that it is in South Africa’s hands to maintain the current break in the clouds into a lasting sunshine in order to have a safer and joyous Christmas and prosperous New Year.

"We call upon all travellers, especially those who are unvaccinated or partly vaccinated coming from areas declared hotspots, to get vaccinated before hitting the roads. [This is] to protect their families and friends they will be visiting during this period associated with large social gatherings like parties and weddings, which can be ‘super spreader’ events that carry a huge risk of transmission of the virus", the Minister said.

Vaccination and following all safety precautions, will not only reduce the spread of the virus, but also take the pressure off hard working healthcare professionals who have worked tirelessly to keep everyone safe.

Phaahla added that the department will continue to closely monitor the situation throughout this period in terms of daily infection cases, hospitalisations, mortality and recovery rates, and make the necessary recommendations to the NCCC in the best interest of people’s lives and livelihoods.

Working with the provinces, the department will ensure that sufficient vaccination sites remain operational, including pop-up sites at some public places like malls, open community sporting based venues and roadblocks.