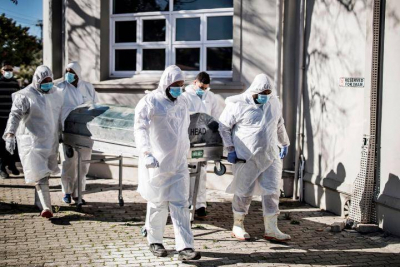 National Institute for Communicable Diseases (NICD),reports 21,099 new COVID-19 cases that have been identified in South Africa, which brings the total number of laboratory-confirmed cases to 3,353,106. This increase represents a 30.6% positivity rate.

This increase represents a 30.6% positivity rate.

NICD says a further 99 Covid-19 related deaths have been reported, bringing total fatalities to 90,587 to date.

Hospital admissions have also increased with 138 admissions per day, but deaths rates remain low with fewer than two deaths daily.

Western Cape’s rural districts are also seeing increases in cases, with the largest number of infections coming from the Garden Route in George followed by the Cape Winelands.

But there is good news, infections are expected to decrease by next week.

That said, the Western Cape has not yet reached the peak of the fourth wave.

Currently, BA.1 is the dominant sub-lineage in South Africa and accounts for 100% of infections in the Western Cape.

"We continue to see a widening gap between cases and admissions which started in wave 3 but increased in wave 4," said Western Health Department Head Keith Cloete.

The risk of admission remains 40% lower in the fourth wave vs the third wave when you take into account age, sex, comorbidities, vaccination, and prior diagnosed infection.

"Undiagnosed prior infection is likely to also protect against severe disease but it remains unclear if Omicron is less severe after fully considering protection from vaccination and prior infection," said Cloete.

The proportion of cases with severe disease to date has been lower – this is most likely due to infections among the younger populations who are at lower risk of severe disease and stronger protection from prior infection and vaccinations.

There has also been an increase in the number of health workers that have tested positive, the most vulnerable being nurses.