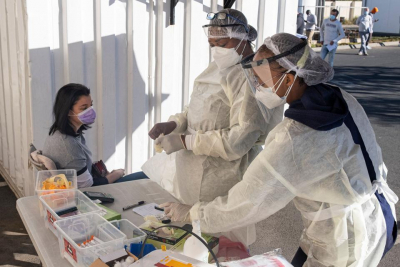 The National Institute for Communicable Diseases (NICD), reports 9,860 new COVID-19 cases that have been identified in South Africa, which brings the total number of laboratory-confirmed cases to 3,504,554.

This increase represents a 21.0% positivity rate.

There has been an increase of 419 hospital admissions in the past 24 hours. The following table is a summary of reported COVID-19 admissions by sector.

The Western Cape has announced that it has passed the peak of its CPVOD-19 fourth wave, driven by the Omicron variant.

In addition, the province said it expects a consistent decline in cases in the weeks ahead.

"The Western Cape has already passed the peak of the fourth wave, and we will have exited the fourth wave entirely once we have approximately 600 new cases per day based on the seven-day moving average of cases,"said Western Cape Premier, Alan Winde.

In addition, he said the province is starting to see decreases in the number of daily new cases with an average of 2 022 new diagnoses per day.

Meanwhile, the proportion of positive COVID-19 tests has dropped an average of 52%, while hospital admissions have plateaued with 225 admissions per day.

While the number of cases and test positivity rate exceeded the second and third wave peaks, Winde revealed that hospitalisations and deaths remained notably low.

"Throughout this time, our health platform maintained sufficient capacity to respond. We did not need to open all our field hospital wards, and we maintained our COVID-19 critical care capacity throughout this period, including at our peak," he said on Thursday.

While deaths have increased in the last two weeks, they stand at just 24% of the third wave peak.

"This is very positive and can be attributed to increased protection from the vaccines, immunity from prior infection, as well as emerging evidence that Omicron may be less severe.

"We are discharging patients faster than we are admitting them – showing that hospitalisations are on the decline."

He said there has been a sustained week-on-week decrease in the number of hospital admissions.

In addition, oxygen usage did not exceed 50%, remaining the province’s lowest trigger level even during the peak.

"In normalising the response, we must refocus our attention on our country’s second pandemic, which also cost lives – our jobs crisis."

The province has had fewer deaths among fully vaccinated people during the recent wave compared to previous resurgences.

"This shows that vaccines are highly effective in preventing severe illness and death. Please do make use of your vaccine opportunity, including your booster shot, should you be eligible. This is especially important if you are at high risk of severe COVID-19 disease."

"I strongly encourage those who have not already done so to get vaccinated."

Winde has also thanked healthcare workers for their hard work over the last month, especially during a time that many would have spent time with family and friends over the festive season.